Last week I had the opportunity to address two groups of Portland firefighters who were receiving training to qualify as acting officers. Acting officers here at Portland Fire & Rescue are usually senior firefighters who ‘act’ in place of the regular company officer when he or she is unavailable.  Normally, officer vacancies (for vacation and sick leave) are filled with regular sworn officers.  But, for short duration vacancies, actors are used. They need to know the basics of the officer’s job and in many cases they go on to become officers themselves.

These firefighters were attending our Acting Officer’s training.  It is an intensive four-hour course that is given on an ‘as-needed’ basis.  The firefighters learn how to operate the radios, mobile data computers, and make all of the necessary computer entries for staffing, training, inspections, and incident documentation; generally everything you need to know to successfully act in the capacity of an officer.

From a safety standpoint, the most important message that I had for these firefighters was that when they are the acting officer, they are also the safety officer for their crew.  It is a difficult transition to make and often means leaving behind the physical aspects of working at a fire or emergency scene for a more supervisory role.  I related to them the difficulty I had when I made the transition years ago.  Unable to keep my axe in its scabbard, I was ‘helping out’ inside a fire building.  One of the veteran firefighters took me aside and asked if I would have stood around and watched my lieutenant do all the work while the rest of the crew merely observed.  I said, “Of course not.” It was a good lesson.  My crew expected me, as the officer, to watch out for their safety, make sure that what we were doing was the right thing at the right time, and let them do the physical work. 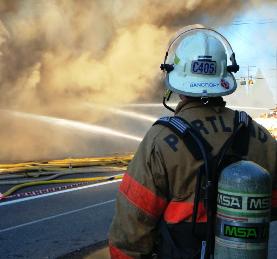 Safety is job one in firefighting. It is an inherently dangerous, unpredictable job.  Many of the mistakes we make on emergency scenes can lead to injuries or worse.  We train.  We watch out for each other.  We wear our protective equipment. We think before we act.  But time and again we see evidence of the total unpredictability of our job. Perhaps the most graphic example being the World Trade Center (WTC) fires nine years ago.  After the terrorist attacks, the resulting fires drew hundreds of FDNY firefighters to the scene.  As they ascended the stairs to fight the fire and evacuate the upper floors, I’m fairly certain they were not expecting the total collapse of the two massive buildings.  When the towers came down, 343 firefighters lost their lives in the line of duty.  Almost a decade later, it is still an unimaginable number.

This Saturday, September 11, 2010 marks the ninth anniversary of the terrorist attacks on the WTC.  The repercussions of this event are still being felt in every corner of the United States.   But please, take a moment this week to remember the bravery and sacrifice displayed by the FDNY firefighters as well as all of the emergency responders on that fateful day.  Their families, friends, and colleagues will carry the burden of their loss the rest of their lives; let’s remember them and be thankful for every day we live and every opportunity we have to serve each other.

Until next time – Be Safe!