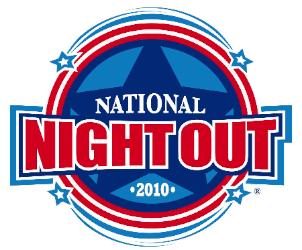 Portland firefighters were out in force in early August 2010 to spread good will and awareness at annual National Night Out (NNO) Against Crime celebrations and block parties all over Portland. In an effort to build community and prevent crime, the neighborhood block parties often featured food, music, crime-prevention information, police and fire demonstrations, fingerprinting, and more.

Firefighters from Station 11 attended neighborhood gatherings at Calvary Lutheran Church and Mount Scott Park in SE Portland.  They answered questions, handed out stickers, and offered fire safety messages to approximately 550 citizens.  Captain Rob noted that NNO was a great opportunity to meet the citizens in the various neighborhoods that Station 11 serves. Station 7 also attended six block parties in SE Portland and made contact with over 285 citizens.

In NE Portland, firefighters from Station 13 participated in three different activities within their community including a party for residents at Dalke Manor, a Housing Authority of Portland housing facility, an outdoor event at 101 N. Morris, and the Emanuel Hospital Health and Children’s Festival. Firefighters offered tours of the fire truck and engine and explained the duties and responsibilities of a firefighter.

In North Portland, firefighters from Station 17 and 24 attended a total of five community functions in the Overlook, Humboldt, and Hayden Island neighborhoods, interacting with close to 185 citizens.

By celebrating National Night Out Against Crime, Portland citizens joined more than 36 million people from all over the country. National Night Out Against Crime is designed to heighten crime and drug prevention awareness, generate support for and participation in local anticrime programs,  strengthen neighborhood spirit and community partnerships, and send a message to criminals letting them know that neighborhoods are organized and fighting back.