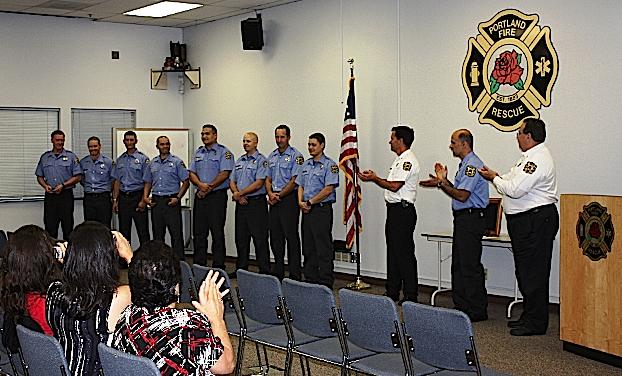 Fire Chief Klum acknowledged the class’ accomplishments and personally thanked the recruits and their family members for their commitment, while urging them to continue in their fire-service education and be safe.

Class 09-02 is made up of diverse backgrounds in work and education. There is a former researcher for Oregon Health and Science University, a semiconductor chip maker, a college football player, a stay at home dad, a paramedic, and more. Educational backgrounds range from recruits with some college education to persons with Masters Degrees.

According to Mark Kaiel, the Captain at PF&R’s Fire Station 2, the members of this class did vwell in all phases of their training. “This rigorous professional training provides our newest firefighters with the skills needed to perform their jobs effectively and safely,” Kaiel noted.

The road, however, has been long to get to this point. Members of Class 09-02 successfully completed an eight-week Training Program and a 16-week Recruit Academy. Class 09-02 then transferred to Station 2, a working fire station in the City of Portland.  Under the supervision of firefighter specialists and training officers such as Captain Kaiel, the firefighter recruits spent three months training on Station 2’s engine company, then three months on Station 2’s truck company.  During that time, they learned bureau Emergency Medical Service protocols, practiced challenging scenario based evolutions, and responded on emergency calls.

The eight successful Firefighter Recruits from Class 09-02 will now be transferred to stations around the City of Portland where they will spend another eight weeks of independent learning and continuing evaluation.

Just wondering why the names of the recruits are not listed.

I've been looking in to many different fire academies. I have a few question in regards to your academy.
If someone could please give me a call.

Given so much info in it, These type of articles keeps the users interest in the website, and keep on sharing
http://straight2voicemail.com.au