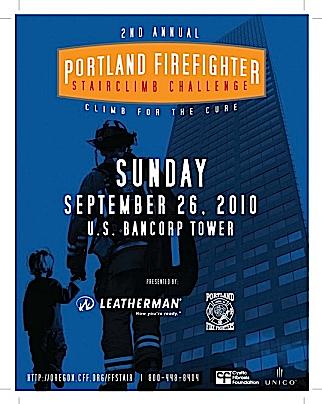 On Sunday, September 26th at 9:00 am, firefighters from around the Pacific Northwest, including several from Portland Fire & Rescue, will trade stair-steppers for the real steps of the US Bancorp Tower in downtown Portland for the 2nd Annual Portland Firefighter Stairclimb Challenge benefitting the Cystic Fibrosis (CF) Foundation.

Firefighters will be outfitted in over 70 lbs. each of full "combat gear" including Self-Contained Breathing Apparatus (SCBA) commonly used in the line of duty. Racers will vie for men's and women's titles in individual competition. Team titles are also awarded based on the combined time of the team's fastest racers.

Although the Portland Firefighter Stairclimb is open only to firefighters, the public can help through donations. Visit https://www.cff.org/Chapters/oregon/EventDonation/index.cfm?idEvent=13658 to make a donation that will support the mission of the CF Foundation and help keep pace with current commitments to vital cystic fibrosis research and care.

a wonderful event for a great cause..