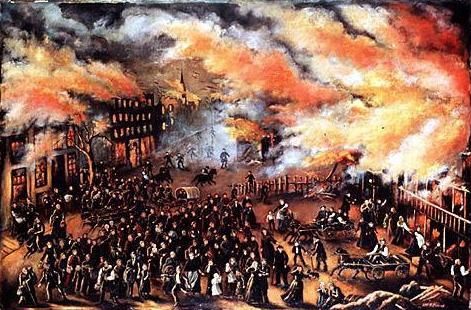 October 8, 2010 -- According to the National Fire Protection Association (NFPA), the quick spreading Great Chicago Fire is one of the largest fire losses in United States history. The Great Chicago Fire was a conflagration that burned from Sunday, October 8, to Monday, October 11, 1871, killing hundreds of people, destroying thousands of structures, and burning more than 2,000 acres in Chicago, Illinois.

The fire was said to have started at about 9:00 p.m. on Sunday, October 8, in or around a small shed that bordered the alley behind 137 DeKoven Street. Traditional accounts blame the origin of the fire on a cow kicking over a lantern in a barn owned by Patrick and Catherine O'Leary.  This theory, however, has been discredited and journalists and historians continue to speculate as to the fires causes. 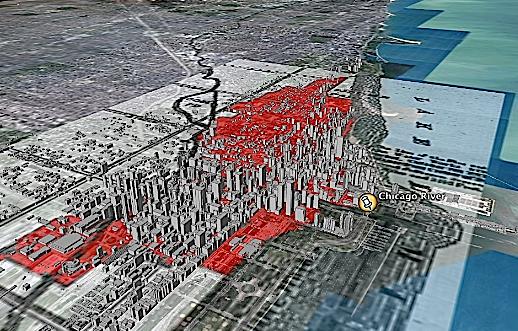 The Great Chicago Fire, as seen from Google Earth

Spread of the Blaze

The local fire department was alerted when the fire was still small. However, history shows that the attempts to contain and stop the fire were unsuccessful. The fire moved quickly through Chicago’s central business district, destroying hotels, department stores, Chicago's City Hall, and landmarks such as the opera house and theaters, churches, and printing plants. The fire finally burned itself out, aided by diminishing winds and a light drizzle that began falling late on Monday night.

It was eventually determined that the fire destroyed more than 70 miles of roads, 120 miles of sidewalk, 17,000 buildings, and caused close to $200 million in damage (the adjusted loss amount in 2008 dollars is upwards of $3.0 billion). Close to 100,000 citizens were left homeless.

what are the causes for fire accidents for major incidents. <a href="http://weightlossclues.com/">weight loss tips</a>