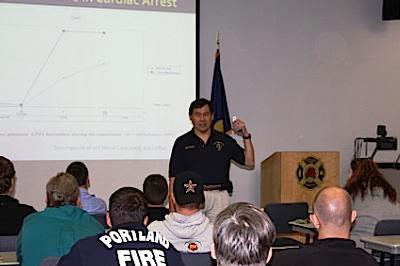 Dr. Jonathan Jui, M.D., M.P.H. received a standing ovation from the crowd when receiving the prestigious Director’s Medal at the 2010 State EMS Awards Banquet on Friday, October 8, 2010. This annual banquet is a way for the Office of Emergency Medical Services to recognize individuals for their hard work and dedication to the provision of emergency medical services in Oregon.

Dr. Jui is the Portland Fire & Rescue and EMS medical direction as well as the Multnomah County Medical Director. 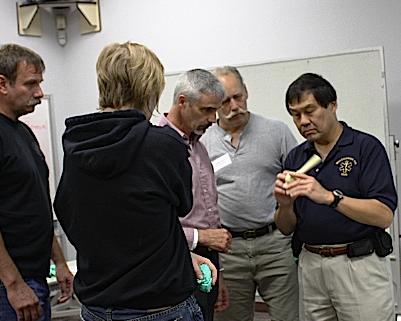 at a Multnomah County Joint Training session in October 2010.

According to the award write up, Dr. Jui is considered by his colleagues to be one of the most involved and influential physicians in the history of Oregon EMS. He graduated from the University of Michigan in 1972, and attended Wayne State University for Medical School and his Internal Medicine Residency at OHSU.

Dr. Jui is Board certified in Emergency Medicine and Infectious diseases. His contributions to the State of Oregon started in 1981, when he joined the faculty of the Emergency Dept at OHSU. In 1990, Dr. Jui became the Medical Director of Portland Fire & Rescue and has since expanded the position to become the Multnomah County EMS Medical Director.

Statewide, he serves as the Medical Director of the Oregon State Police and the US Forest Service. Dr. Jui's honors include (but are not limited to) OHSU Emergency Medicine Faculty Clinician of the Year, Oregon DMAT Volunteer of the Year, and Oregon EMS Medical Director of the Year. He has recently stepped down as Chair of the State EMS Committee – a position that he has held since 1991. It is his leadership on this Committee that has been integral in securing Oregon's place as a National leader in EMS.

the Director’s Medal and honors his career of service to Oregon EMS.