Portland Fire & Rescue (PF&R) firefighters from Engine 11, 29, and 31 gathered at Powell Butte Nature Park in SE Portland this morning to take part in a multi-company low angle rescue drill. Low angle rope rescues involve the use of specialized equipment to reach victims that have been trapped in a dangerous position, such as over a steep embankment. 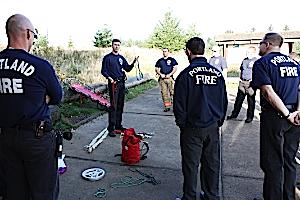 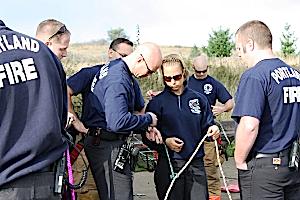 Fire Lieutenant David from Station 11 gave a brief overview, discussing and demonstrating proper usage of rope, webbing, hardware friction devices, how to tie anchors, and the building of lowering and raising (mechanical advantage) systems.  Firefighters then practiced using simple, compound, and complex pulley systems. These types of pulley systems enable firefighters to lift weight loads by applying less force than the load itself over a longer distance. 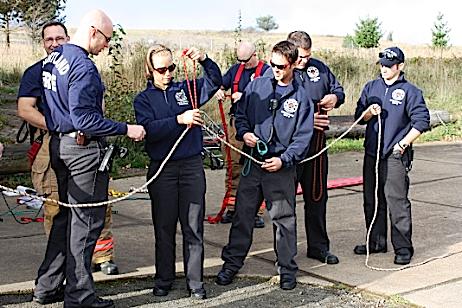 Firefighters then moved to the hilly terrain of the nature park to practice securing and raising a fake victim up a steep slope. During this portion of the drill, firefighters properly secured ropes both to a fixed point and to the litter used to transport the fake victim. Once the rope system was in place, the team of firefighters carefully walked down the slope to place and secure the victim in the litter. The team then worked together to transport the victim back to the top. 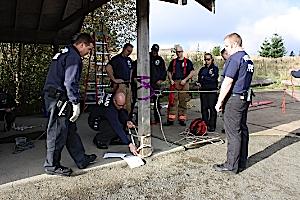 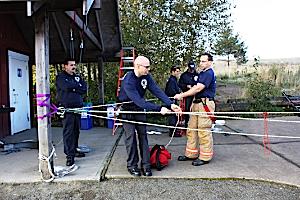 This type of training serves to ensure that our PF&R’s members will be ready to respond, and perform proficiently under this type of technically demanding rescue operation.