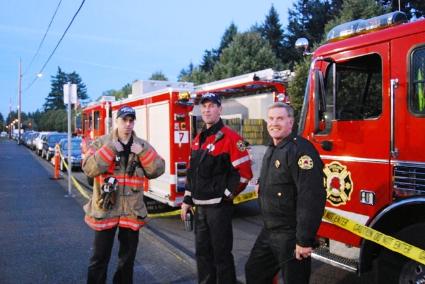 Walking up the side streets to David Douglas High School’s stadium, you can smell fall in the air, the leaves are crunchy, the marching band plays in the distance, and the scoreboard is lit up.  Students buzz with anticipation and excitement.  It is Homecoming and tonight’s football game between David Douglas and Barlow is going to be a good one.

The street outside the stadium is lined with parked cars.  Bordering the end zone, one can’t help but notice Portland Fire Station 7’s truck, engine, and crews.  Portland Fire gets these prime parking spots at every David Douglas home game because when the Scots score, the crews hit their lights and sirens, which is a thrill for all of the players, students, kids, and parents in attendance. 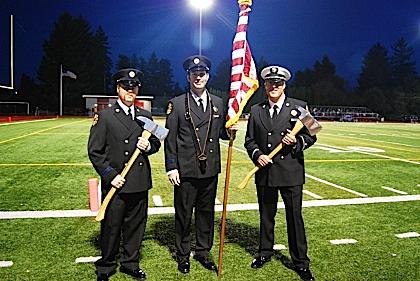 Prior to tonight’s game, Portland Fire’s Station 7 C-Shift Color Guard, including Station 7’s Lieutenant Jeff, Firefighter Mark, and Firefighter Ryan, had the privilege of holding the United States flag during the singing of the national anthem. 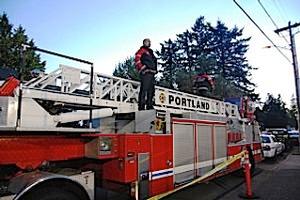 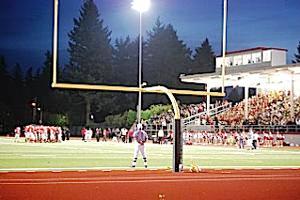 Station 7, located at 1500 SE 122nd Avenue, serves the Mill Park and Hazelwood neighborhoods and is one of Portland’s busiest stations. The crews at Station 7 are highly involved in their community, especially in their neighborhood schools.  During football season, they come out every Friday night to support the David Douglas Scots. 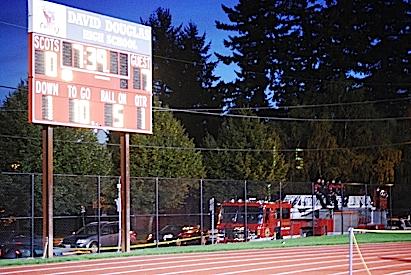 With over 3,000 students, David Douglas High School is one of the state’s largest high schools.  Attending football games gives the crews a chance to build relationships with many of the adults and children in the diverse community they serve.  The crews report that by fostering these relationships, they are perhaps inspiring the next generation of Portland firefighters. 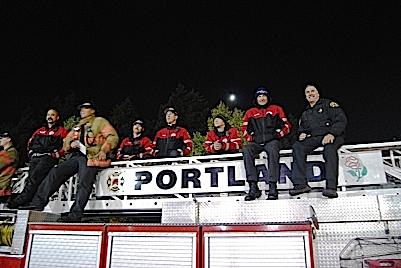 When attending community events like this one, the crews stand ready to respond to an emergency call within seconds.  At times, one or both of those prime end-zone parking spots were empty while firefighters went on emergency calls.  Then they returned to keep cheering on their team, which must have helped carry David Douglas to that 34-22 win over Barlow.