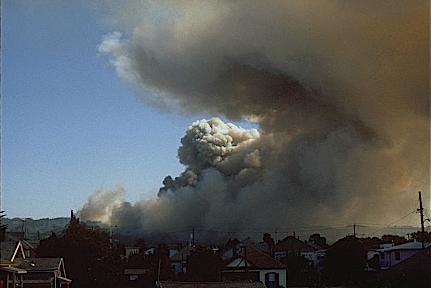 The Oakland Fire Storm early on

The Oakland Firestorm of 1991 was a large urban fire that occurred on the hillsides of northern Oakland, California and southeastern Berkeley on Sunday, October 20, 1991. The fire ultimately killed 25 people and injured 150 others. The 1,520 acres destroyed included over 3,300 single-family dwellings and over 400 apartment and condominium units. The economic loss has been estimated at $1.5 billion. 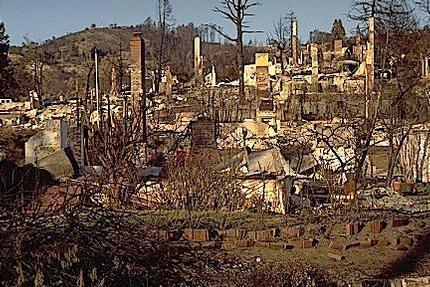 Aftermath of the Oakland Fire Storm

The fire started due to an incompletely extinguished grass fire in the Berkeley Hills. Firefighters fought the five-acre fire on a steep hillside.  By Saturday night, firefighters thought everything was under control. Unfortunately, the fire reignited on Sunday, October 20 as a brush fire and rapidly spread southwest driven by wind gusts up to 65 miles per hour. According to local and national newspaper articles, the fire quickly overwhelmed local and eventually regional firefighting resources.

By 11:30 a.m., the fire had spread to the nearby apartments and the fire tossed embers from the burning houses and vegetation into the air as it went. These embers were swept away by winds only to float back to earth to start the blaze in new locations. The embers enabled the fire to jump across an eight-lane freeway and a four-lane freeway, eventually igniting hundreds of houses.

The fire began generating its own wind, the defining characteristic of a firestorm. The self-generated winds interacted with the wind to create erratic, dangerous gusts, which in turn helped produce numerous cyclonic swirls. All of these combined to help spread the fire, tossing embers in all directions. By mid-afternoon, the wind had slowed and shifted to the west, driving the fire to the southeast. At about 9 pm, the wind abruptly stopped, giving firefighters a chance to contain the fire. 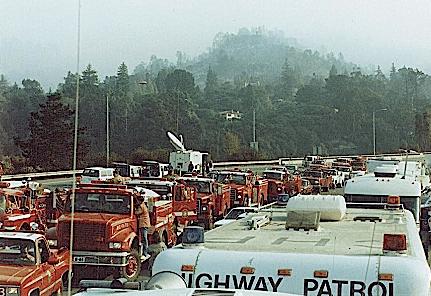 As many as 400 engine companies, 1,500 personnel, and 250 agencies worked to put out the fire. On Wednesday October 23 at 8:00 am, the fire was declared under control, almost 72 hours after it started.

In response to issues about firefighting equipment during the firestorm, Oakland city firefighters now carry extensive wildland firefighting gear and fire shelters. Fire Hydrants were standardized throughout the city, water cisterns and a new hills fire station were added, and radio communications were improved.