The October 2007 California wildfires were a series of wildfires that began burning across Southern California on October 20. At least 1,500 homes were destroyed and over 500,000 acres of land burned from Santa Barbara County to the U.S.–Mexico border. Nine people died as a direct result of the fires; 85 others were injured, including at least 61 firefighters. The raging fire was visible from space. 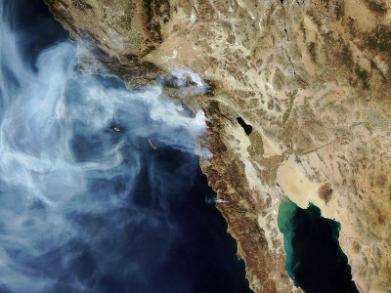 Several of the fires were triggered by power lines damaged by high winds. One fire started when a semi-truck overturned and another was suspected as having been deliberately caused.  Causes of the remaining fires remain under investigation.

Residents experienced mandatory and voluntary evacuations, depending on the projected path of a fire. On October 24, 2007, San Diego County Sheriff Bill Kolender stated that the number of people evacuated in San Diego County had exceeded the number evacuated from New Orleans, Louisiana during Hurricane Katrina.

Two days into the fires, approximately 500,000 people from at least 346,000 homes were under mandatory orders to evacuate, the largest evacuation in the region's history.

By October 23, some evacuations were lifted, allowing about 50,000 residents from the cities of Del Mar, Chula Vista, and Poway, and the San Diego neighborhoods of Del Mar Heights and Scripps Ranch to return home.  The fires continued, however, and damage was severe. The four major fires across San Diego County burned nearly 300,000 acres and destroyed or damaged 1,350 homes and 100 businesses since October 21, 2007.