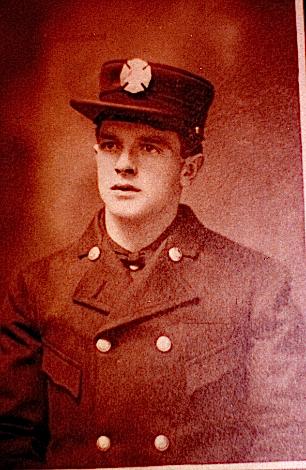 He was working at Engine 12 on October 25th, 1922 when he and his crew were sent to a fire at Washington High School.  The fire, which was purposely set, caused over $400,000 damage (in 1922).  It was a spectacular blaze that could be seen across the east side of the city.

The fire, which went to a 4th alarm, brought both on and off duty firefighters from across the city.  Engine 12 with Gabriel were assigned to the southeast corner of the building.  Just after rendering their hose line operational, Chief Lee Holden realized the wall of the building was about to collapse.  He ordered the crew of Engine 12 to evacuate their position.  While other crew members moved away parallel to the falling wall, Gabriel moved perpendicular.  He was not fast enough to escape the falling stone and brick as it collapsed upon him.  While Lieutenants Cooper and Cahill of the Fire Marshal’s Office bravely tried to rescue Gabriel, they found he had died instantly.

My great-great-grandfather that I never knew. Thank you for your service.

Galatians 5:13
13 You, my brothers, were called to be free. But do not use your freedom to indulge the sinful nature; rather, serve one another in love.

1 Peter 4:10
10 Each one should use whatever gift he has received to serve others, faithfully administering God’s grace in its various forms.

Joshua 22:5
5 But be very careful to keep the commandment and the law that Moses the servant of the LORD gave you: to love the LORD your God, to walk in all his ways, to obey his commands, to hold fast to him and to serve him with all your heart and all your soul.”

You did well Gramps! Thank you for your service.