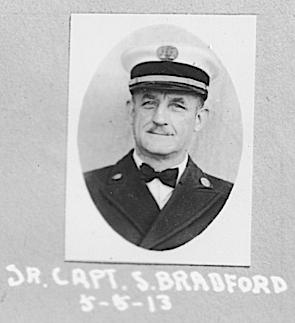 Elmo St. Clair Bradford was born September 26th, 1888.  He became a Portland Firefighter on May 1, 1913.  He enjoyed numerous assignments as he rose through the ranks to Captain.  He was assigned to Engine 15 in Portland Heights on October 24, 1945 when he suffered a heart attack or stroke while fighting a fire at SW Hoffman Road and Broadway Drive.

Captain Bradford had a tremendous love for flowers and was active in various groups in Portland.  He was the organizer and first president of the American Primrose Society and led an extensive planting of primroses around the Portland Heights Fire Station at SW Spring and Vista.  He was also active in the Portland Men’s Garden Club, the Portland Dahlia Society, and the Portland Chrysanthemum Society.

He was survived by his stepson Edgar Elefson.