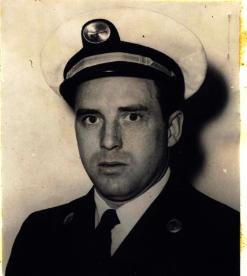 Virgil Spencer was 41 years old when he was killed at a fire at BP Johns Furniture Corporation at 5200 SW Macadam Avenue.  Lieutenant Spencer began his firefighting career with the Multnomah Fire Department in 1943.

In 1951, Multnomah was annexed by Portland and the fire department was brought into the Portland Fire Bureau.  Spencer found a home fire station at Engine 5 in SW Portland, serving as Lieutenant.

On October 29, 1966, a fire broke out at the BP Johns Furniture Corporation.  While leading his crew, Spencer fell to his death when a sawdust bin was stirred up, ignited, and created a dust explosion that knocked him from a catwalk 40 feet to the floor below.  He was transported to the hospital where he was pronounced dead.

He was survived by his wife and four children.

This is my grandfather on my mothers side. I am proud 3rd generation firefighter who served seven years as volunteer firefighter/ EMT and 5 years as a Forest Officer for the Oregon Department of Forestry.

My father is a retired firefighter from Tualatin Valley Fire and Rescue as well.

Thank you for honoring his memory.