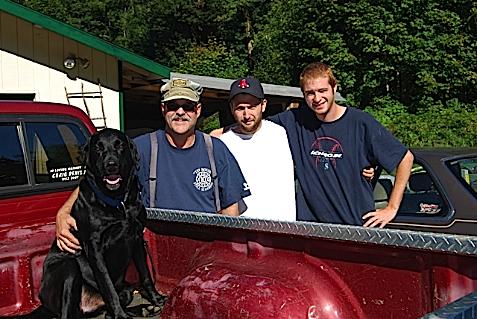 A black Labrador Retriever lies in the bed of Frank Isselhardt Sr.’s pickup.  The warm September sun glistens on the dog's shiny, black coat.  Two-year-old Stryder alternates between licking his paw, where a toenail now is visibly missing, and tapping his owner affectionately on the arm for a pat.  To see him, no one would guess at the ordeal Stryder and his family endured just three weeks ago.

It has been a rough 18 months for Isselhardt, 55, of Cougar, Wash.  He was laid off from his job and has been searching for work.  His son, Frank Jr. and future son-in-law Richard March, carpenters by trade, also have been impacted by the economy – taking any work they could find.  At the end of August, the trio decided to make the best of their situation and use some of their free time to explore the Mount St. Helens wilderness.

On August 29th, the Isselhardts and March had a friend drop them off 57 miles from Cougar at Windy Ridge, just four miles from the mountain’s crater.  They had prepared for a two-day hike, which was expected to end at Blue Lake where a car awaited their arrival.  With Stryder and backpacks in tow, they set off with a map they had bought at an area grocery store. 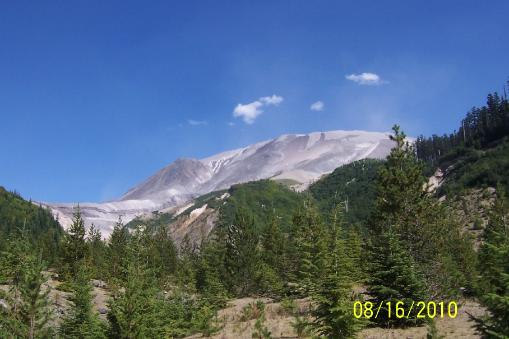 Full of anticipation, the hikers recall the picture perfect view of Spirit Lake and encountering a herd of elk as they hiked the Windy Ridge trail.  However, after 11 miles, unexpected obstacles began to crop up.  Temperatures on the mountain reached 100 degrees.  The marked trail had fallen off at the Toutle River, forcing them to repel down the canyon by rope.  Then they noticed Stryder stopped in the river bed, seemingly soaking his feet.  To their dismay, they discovered that the pumice rock on the trail had worn the pads off Stryder’s paws.  With the 115 pound dog unable to walk, they were in trouble.

Setting up camp for the night, the three nursed Stryder as best they could, applying antibiotic ointment to the dog's bleeding paws and bandaging them.  Exhausted from their 11 mile hike in the extreme heat, the group set up camp, ate dinner and went to bed.  In the morning, Stryder - normally a bundle of energy - lay listless and unable to stand. 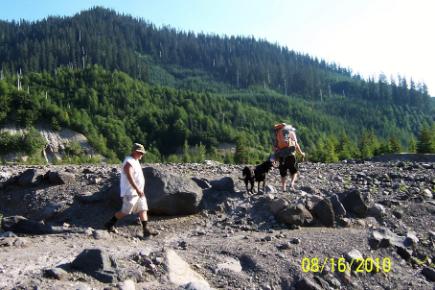 “I knew there was only one thing to do,” Isselhardt Sr. said. “Unprotected, Stryder was defenseless and easy prey for cougars and coyotes.  I had to stay with him while the boys went for help.  He’s a member of our family.”

Meanwhile, Ryan Rossing, an off-duty Portland Fire & Rescue lieutenant, and Rossing's friend, Castle Rock City Councilman Mike Mask, had stopped for water along a creek when they heard someone blowing a whistle.  The two had been camping several hours away with their families and were scouting the area for hunting season when they came upon Isselhardt Jr. and March. 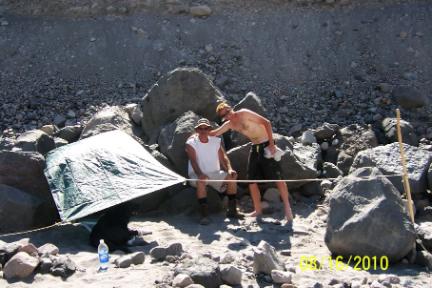 From observations of a firefighter and first-responder, "these young men appeared disoriented and dehydrated,” Rossing said.  “They said were trying to get to their car at Blue Lake, but that was over 10 miles away.  They were in no condition to make that hike.”

Relying on their rescue training, Rossing and Mask – a 15-year Army veteran - devised a plan to help the family.  Rossing and Isselhardt Jr. would return to camp where Isselhardt Sr. and Stryder remained.  Mask and March would hike out to get help.

Retracing the path back to his father proved difficult for Isselhardt Jr.  “I couldn’t recall exactly where I had left them,” he said.  Recognizing the signs of heat stroke, Rossing said he had Isselhardt Jr. take off his shoes and periodically put his feet in the water to cool his body temperature as they hiked up the river bed.

It was mid-day and the August sun bore down on Rossing and Isselhardt Jr.  As they rounded a bend in the river bed, they came upon the objects of their quest.  Father and son embraced in an emotional reunion.  Then Isselhardt Jr. collapsed in exhaustion and slept.

Isselhardt Sr. made it clear he wouldn’t leave his dog behind.  Knowing that a helicopter couldn’t land in the ravine, Rossing decided their only option was to move.  With 100 feet of rope from his backpack, a six-foot tarp, an old fence pole found nearby and Isselhardt Sr.’s walking stick, Rossing set to work making a stretcher for Stryder – a decision that would ultimately save the dog’s life. 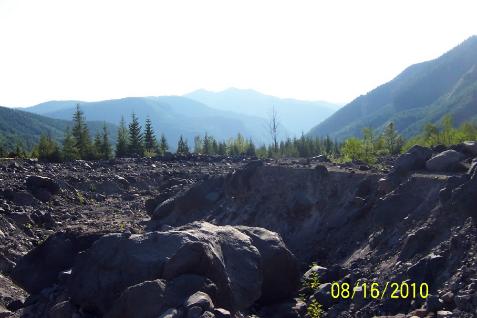 Walking along 100 feet at a time, sliding down embankments, and scaling large rocks, Rossing pulled the injured animal and monitored the hikers’ conditions for nearly two miles.  Darkness was fast approaching and a song was stuck in his head – a song from a documentary he had watched about an injured mountain climber who backed out of a crevasse after a fall using just his arms.  “The song played over and over again in my head,” Rossing said, laughing.  “It was my inspiration to keep pulling and ignore the ache in my arms.”

Between searching for help and leading Rossing back to their camp, Isselhardt Jr. had hiked 17 miles that day and could not continue.  To complicate matters, Stryder began vomiting and couldn’t hold down liquids.  Given the circumstances, Rossing made the decision to set up a camp for the hikers while he made the final leg of the trek to his four wheeler.  Walking another half mile to his four wheeler and riding another 45 minutes in the dark, Rossing made it to the Skamania County Search and Rescue Team.  He was able to give them the hikers’ coordinates as well as a medical report on their conditions. 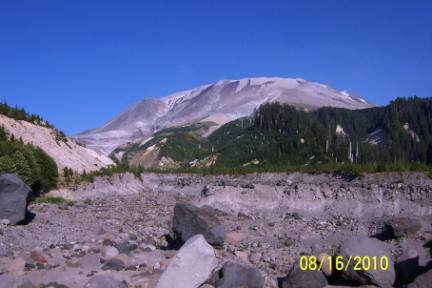 Search and rescue had been summoned earlier by Mask and March after an unexpected delay.  The four wheeler they were riding on to find help got a flat tire during the 45 minute ride.  In the process of changing it, a cord snapped hitting Mask and cutting his face.  March recalls taking off his shirt to help stop the bleeding.

At 11 p.m., the Isselhardts heard a U.S. Coast Guard helicopter hovering above them and knew that their rescue was imminent.  The helicopter flew them to Longview, Wash., where they received medical attention and a veterinarian attended to Stryder. 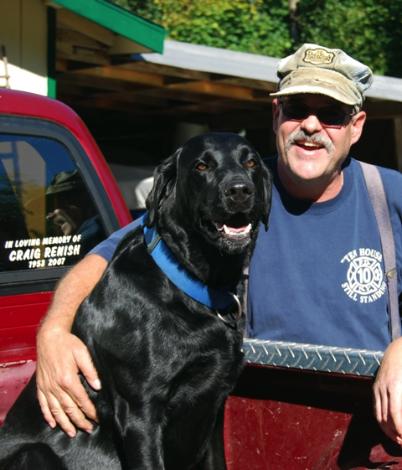 The Isselhardts and March escaped their ordeal with heat blisters, exhaustion, and some valuable advice.  “Always check current trail conditions when you are hiking and don’t take family pets," Isselhardt Sr. said.  "As tough as you think dogs may be, learn from Stryder’s experience. Leave them at home where they are safe.”

As for their rescuers, the Isselhardts and March describe them as heroes.  “Firefighters like Ryan Rossing are prepared to save lives when they are on and off duty,” Isselhardt Sr. said.  “Mike and Ryan were they when we needed them and never thought twice about themselves.  They were our guardian angels.”

I got a chance to meet both Councilman Mike Mask and Lt. Ryan Rossing at the Fire Bureau Awards Ceremony a couple of nights ago. The story of the rescue they performed is, to say the least, gripping.

This blog posting could easily be a script for a movie...with the notable exception that such scripts are usually fiction.

I am extremely proud of both Ryan and Mike.

What a fantastic story! All animals should have guardians as devoted and responsible as Frank Isselhardt Sr. and his family and (new) friends as great as Rossing and Mask. Now THEY are heroes!!!

Ryan, I am so proud of you. You can be certain your Father is looking down feeling the same way with a smile on his face. Love, Mom

What a great story! It gives me an opportunity to share your world with my family who is far from you. Even so, I think of you often and wonder how you're doing! Now I know just how busy you are. Your Dad would be so proud. We're especially happy because you also rescued a dog. Our chocolate lab salutes you. Love, Aunt Robin

We all salute you! I want you in my area if I'm ever needing to be found or needing assistance! Your story brought me to tears. I too have a soft spot for the dog. "Thank you for the work you do" seems too little. You are worthy of a hero's praise. Love, Jacki (and Steve)

People who have grown up with Ryan know what a truly remarkable and innovative person that he is. It is no surprise to see him apply those personal qualities to an unexpected situation. What a tribute Ryan's story is to all professionals who work in life and death situations. We are proud of our young nephew.