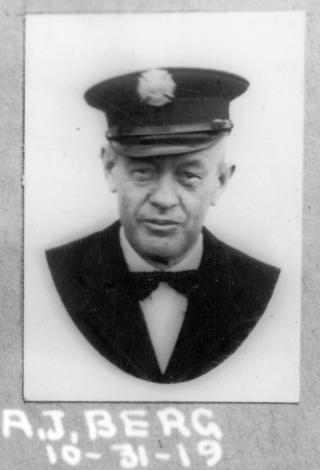 Alfred Berg was born November 18, 1884.  Hired by the Portland Fire Department on November 1, 1919, he was first assigned to Engine 26, Truck 3, and later Engine 33 where he served as the driver/engineer.

On November 2, 1948, at age 62, Engine 33 was called to a 2nd Alarm fire at the Independent Marine Propeller Manufacturing Company at 8950 N. Bradford Street.

Berg and his crew played a hose line on the stubborn fire in the one story building.  It was during this work that he collapsed to the ground.  The first aid squads from Truck 7 quickly provided aid but were unable to revive Berg.  He was pronounced dead at the scene at 9:15 PM.

He was survived by his wife and two daughters.