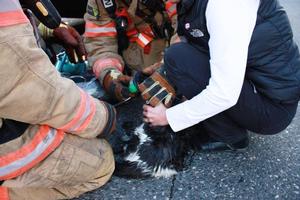 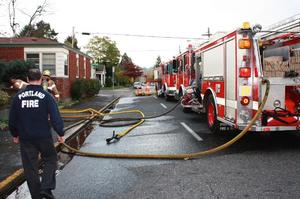 Portland firefighters responded to reports of flames coming from an apartment at 1112 SE Tacoma St., #1 at 2:23 pm. Firefighters arrived first on scene in just under four minutes after the fire was dispatched at 2:27 pm. Upon arrival, firefighters found smoke coming from a rear bedroom of the residence, which is part of a 4-plex.

Firefighters achieved a quick knock down of the fire, and began searching for two cats which were reported missing. Firefighters located one of the cats, named Rex, in a back bedroom of the structure under a bed. The cat was unresponsive until firefighters took it outside and began administering aid to the animal using a pet resuscitation mask. Pet resuscitation masks are carried on all Battalion Chiefs' vehicles in the City of Portland, and used as needed during fire-related emergencies involving pets.

Fortunately for Rex the cat, the Cat Hospital of Portland was right across the street. After receiving initial aid from firefighters, he was taken to the clinic and began receiving immediate treatment for his injuries. Last reports indicate that Rex had some singed fur, cuts, and suffered smoke inhalation, but would be okay. The second cat,

Rex's brother, went missing but firefighters believe he ran out an open door and escaped.

A Fire Investigator responded to the scene and has determined that the cause of the fire was electrical-related due to over use of a power strip in an electrical outlet. Damage is currently estimated at $10,000.

Portland Fire & Rescue reminds citizens that the use of power strips and multi-plug outlets increases the draw of electricity through your home's wiring. Before creating additional electrical demand, make sure your wiring is in good repair and is large enough to carry the additional load. It is especially important if you live in an older home or apartment not to overload electrical circuits.