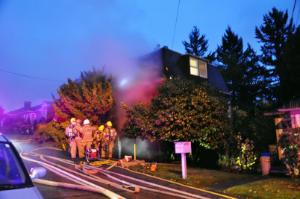 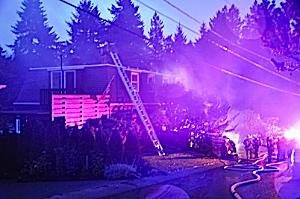 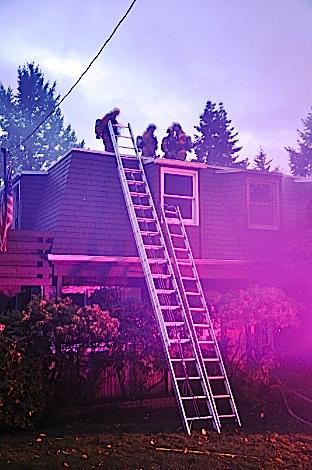 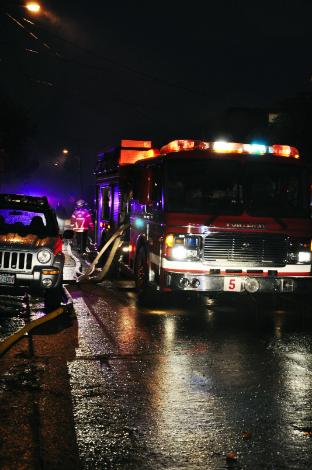 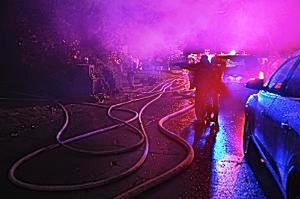 Portland Fire & Rescue responded to a fully involved house fire this morning.  The homeowner heard his smoke alarm going off when he stepped out of the shower and immediately left the house.  After returning to put on pants, he went next door to ask his neighbors to call 9-1-1.  "He was lucky," states Public Information Officer Paul Corah.  "Never return to a burning building.  It's better to be embarrassed than burned."

At 6:05 am, engines and trucks were dispatched to 6464 SW Parkhill Way.  The first-arriving engine reported that the home was "fully involved", which means that there were flames visible from multiple areas of the house.

Narrow streets in the neighborhood, long distances between hydrants, and a broken fire hydrant made it difficult to get water to the fire.  Fortunately, the homeowner had evacuated; everyone is safe.

The fire was declared under control and "recalled" at 6:58.  A "recall" means that the commanding officer doesn't anticipate needing more dispatched resources.

Initially, five engines and one truck were dispatched to the scene.  The commanding officer requested another engine and truck to help with site overhaul.  A rehab unit was also called to bring full air bottles to firefighters.  Investigators are on scene.

Portlanders are reminded to 1) Make sure your home has properly installed and working smoke alarms. 2) Plan and practice a fire escape plan.  3) In case of a fire, get out and stay out.  Going back into a burning home can be deadly.