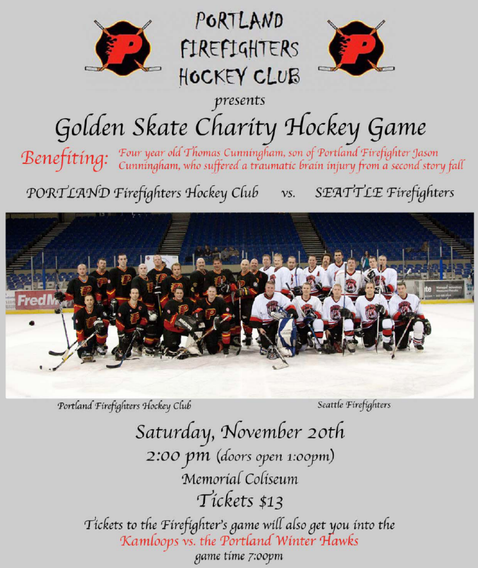 Members of the Portland and Seattle Firefighters Hockey Clubs are hitting the ice to raise money for medical costs to treat a Portland firefighter’s four-year-old son who suffered a traumatic brain injury after a second story fall.

Doors open at the Memorial Coliseum at 1:00 pm on Saturday, November 20, 2010, with game time between Portland and Seattle beginning an hour later. Tickets are $13.00, and will provide access not only to the Firefighters hockey game, but to the 7:00 pm game that night between the Portland Winterhawks and the British Columbia Kamloops Blazers.

The Portland Firefighters Hockey Club (PFHC), formed in July 2004, has competed in multiple tournaments, winning one championship in June 2005 and raising and contributing money to the National Childhood Cancer Foundation, ALS foundation, Oregon Burn Foundation, MDA, and other local charities.