Portland Fire Investigators have determined that there were multiple space heaters in use throughout the residence at 5525 SW Idaho St., the location of an early morning house fire. One of the space heaters, located in a rear utility room, was determined to have tipped over and caused the fire. Damage to the home is currently estimated at $200,000 - $250,000.

Portland Fire & Rescue reminds citizens to always keep space heaters at least three feet away from anything that can burn, including furniture, blankets, curtains, and paper products and to choose space heaters that turn off automatically if they tip over. Heating is the second leading cause of home fires and portable space heaters are the top cause of fire deaths from home heating equipment.

Click here to view video of the fire scene, courtesy of KGW NewsChannel 8. 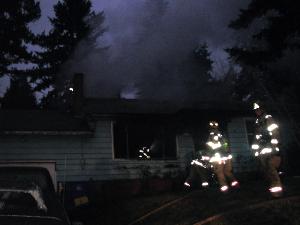 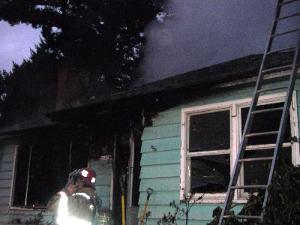 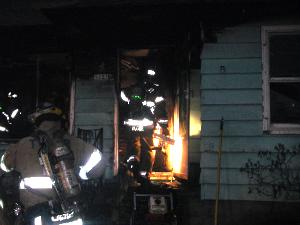 Portland firefighters responded to reports of fire coming from the rear of a single-family residence located at 5525 SW Idaho Street in Portland, Oregon at 6:37 am.

Firefighters arrived at the scene five minutes later at 6:43 am. Crews encountered heavy fire coming from the front and rear of the structure. Less than one minute after firefighters arrived and began pulling hose lines, a flashover occurred on the main floor of the structure. Flashover is when nearly all the combustible material in an enclosed area simultaneously ignites and can be potentially fatal for firefighters caught inside a burning structure when it occurs.

"Firefighters are extremely fortunate today that the flashover occurred seconds before they entered this burning home," said PF&R Public Information Officer Paul Corah. "Although firefighters are trained to recognize the signs of a flashover, it is an ever present threat that they accept as being part of the job of protecting life and property."

Firefighters determined that the two occupants and their dog escaped the fire safely. Making conditions difficult for firefighters was the 17 degree temperatures that they were working in. Ensuring that hoses don't freeze and keeping firefighters warm are especially important to firefighting operations in cold weather. A PF&R rehab unit responded to the scene to with equipment, such as additional air bottles and heaters, to support this firefighting effort.

The fire was brought under control at 7:13 am. Portland Fire & Rescue was assisted by Tualatin Valley Fire & Rescue in fighting this fire. The Red Cross was called to assist the two occupants of the home with temporary housing needs. Two Portland Fire Investigators are currently at the scene. The cause of the fire remains under investigation and damage estimates are not yet available.