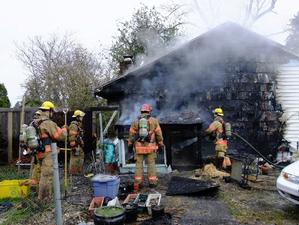 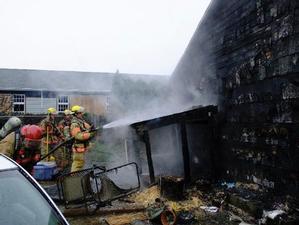 Portland Fire & Rescue responded to residential fire this morning at the 4921 SE 79th Ave. Initial reports from multiple callers described a large amounts of dark and flame from the back of the residence. Callers reported that smoke was visible from several blocks away.

The first arriving crews encountered a detached garage with significant fire involvement on the exterior of the structure. Hose lines were advanced and the fire was quickly knocked down. The homeowner has stated that the fire was started by a heat lamp inside a chicken coop that was attached to the back of the garage. No one was injured in this fire. Damage is estimated at $35,000  and an official cause is currently being determined by PF&R investigators.

Portland Fire and Rescue recommends using extreme caution when using heat lamp equipment in conditions that might place them near flammable  materials. An ordinary 100 watt light bulb runs at approximately 200 degrees, while a heat lamp bulb can be greater than 500 degrees. Wood will ignite at at approximately 575 degrees, leaving very little margin for safe operation.