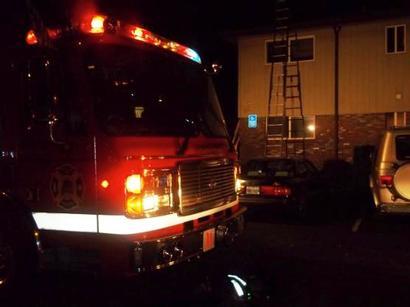 Portland Firefighters responded to reports of a fire coming from a second floor apartment at 4333 SE 104th Ave. at 5:54 pm.  The caller reported that there was heavy smoke in her apartment and she could not find her way out.  Upon arrival at 5:58 pm, firefighters found flames coming from the second story windows of one apartment and heavy, dark smoke in the stairwell leading up to the building.

Firefighters performed a primary search of the apartment units.  They located and assisted two individuals, a 29-year-old female and a 79-year-old male, from their apartments.  Both were treated for smoke inhalation at the scene by paramedics.  Their injuries did not necessitate transport to a hospital.

Firefighters knocked down the fire and brought it under control at 6:21 pm.  A Fire Investigator is on scene working to determine the fire's cause and damage estimates are not available at this time.  The Red Cross was called in to assist the fire victims with finding temporary housing.

PF&R reminds citizens that there are three important things you can do to reduce your risk of injury from a fire.  Make sure your home has properly installed and working smoke alarms, plan and practice a fire escape plan, and in case of a fire, get out and stay out.