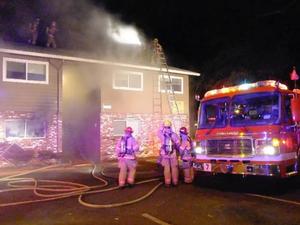 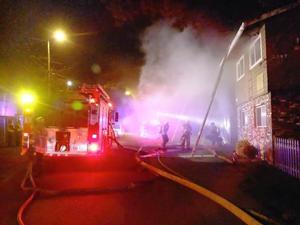 The cause of the fire was due to a 6 year old playing with a lighter.  The closet of the child's bedroom was fully involved when his parents discovered the fire. Fortunately everyone escaped without any injuries.

Portland Fire & Rescue wants you to remember that children are curious about fire. Teach your children about the hazards of playing with matches and other flammable materials.  It is also important to practice a fire escape route with your family, which can help prevent accidents and injuries.

Portland Fire & Rescue responded at 8:12 pm tonight to an apartment fire.  Heavy black smoke was showing when crews first arrived and all tenants had evacuated.  Firefighters were able to attack the fire very quickly and contained it within a short period of time.  Firefighting crews searched all of the apartments in the immediate vicinity of the apartment involved in the fire to be sure that there were not any possible victims not accounted for.  After truck crews laddered the building to check for any extensions and inside crews checked the attic they found that the fire had not extended beyond the unit that was affected by the fire.

Updates on the cause and losses from the fire will be posted as received.