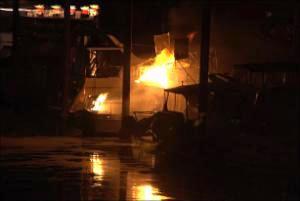 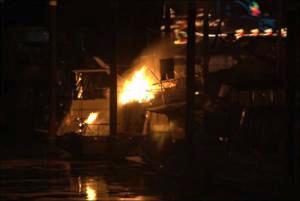 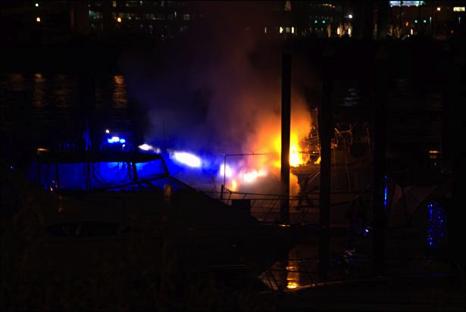 All photos by John Callihan

At 6:56 pm, Portland Firefighters were dispatched to reports of flames coming from a boat parked at the Riverplace Marina located at 0415 SW Montgomery.  Initial reports indicated there was significant smoke and flames coming from the boat.

Upon arrival, firefighters found that a 32-foot trawler that was part of the Christmas ship parade was on fire.  With 200 gallons of diesel on board the boat, firefighters were concerned about getting a quick knock down on the fire to prevent it from spreading to nearby boats.

"Portland Fire's newest rescue boat – the Eldon Trinity – was literally placed into service two hours before this fire occurred," said Public Information Officer Paul Corah.  "It was on scene fighting this fire within eight minutes of being dispatched.  This demonstrates how having a dedicated rescue boat on the Willamette River is already protecting Portland's citizens."

There were five people on board the boat at the time of the fire.  Everyone got off the boat safely by escaping out the front hatch.  The owner was treated for smoke inhalation at the scene by Portland Fire paramedics and did necessitate transport to a hospital.  The fire was brought under control at 7:12 pm before it spread to other boats.  Portland Fire responded from land and water with a rescue boat, fireboat, four engines, and two trucks.

Fire Investigators have determined that the cause of the fire was from a leaking line going from a gas can to a generator.

I was stopped on the Hawthorne bridge and saw the Eldon Trinity come down the river. That thing can FLY! Good job PFR.