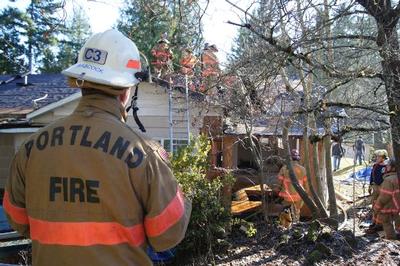 Firefighters were dispatched to reports of flames and smoke coming from a residence at 7393 SE 118th Drive at 12:19 pm. As firefighters from SE Portland's Station 7 neared the scene, they reported seeing a column of smoke rising into the air. 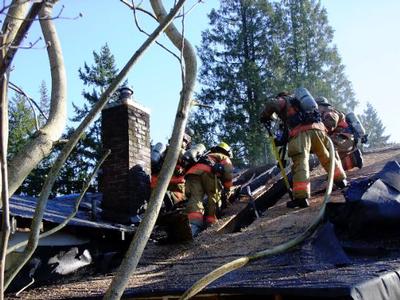 Upon arrival at 12:26 pm, firefighters determined that a construction crew was working in the the home at the time of the fire. Firefighters performed a primary search of the residence to ensure that all the workers were accounted for and had evacuated safely. With the attic fully involved in fire and firefighters cutting vent holes in the roof, commanders ordered all firefighters to exit the attic for safety reasons.

An Incident Safety Officer (ISO) was on scene to ensure that no firefighters were injured while fighting this fire. Having an ISO on scene at all working structure fires is one of the best safe guards PF&R has against firefighter injury. The fire was brought under control at 1:14 pm. A Fire Investigator has determined that the fire was caused by a short in the home's electrical wiring. Damage is estimated at $30,000.