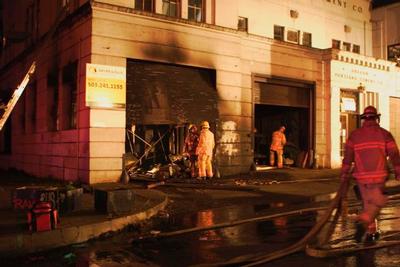 Portland Firefighters were dispatched at 7:25 pm to reports of a building on fire at 111 SE Madison.  The first engine arrived on scene less than three minutes later.  Initial reports indicated that fire was coming from the overhead door on the first floor of the two-story commercial building.  Thick black smoke could be seen from the top of the Hawthorne Bridge.  A 9-1-1 caller further indicated that screaming was heard from inside the building and individuals could be trapped inside.

Nearby railroad traffic was immediately shut down at 7:31 pm so that firefighters could access hydrants and lay hose lines across the train tracks. 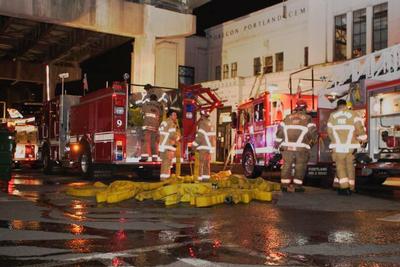 Firefighters from Portland Fire Stations 9 and 21 located and rescued two individuals from inside the burning building - a male and female in their 30's.  Both were transported to Emanuel Hospital with life-threatening injuries.  Firefighters continued to search the 2-story building and determined that all occupants had been evacuated.

Firefighters knocked down the fire and determined that it had been brought under control at 8:00 pm.  Shortly thereafter, rail lines were reopened and train traffic resumed.  A Fire Investigator is currently on scene working to determine the cause of the fire.  No damage estimates are available at this time.

Way to go Portland Fire! This is exactly why we get into the business in the first place.