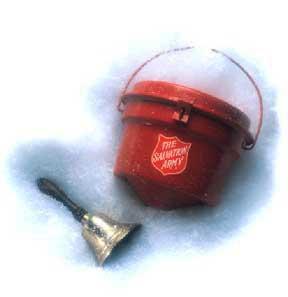 The annual Red Kettle Campaign raises money to support various social services within the Salvation Army, including providing food and shelter to needy local families. In Portland, the kettle campaign raises around $600,000 during the month of December which funds essential services year-round to those who need it.

Where will firefighters be ringing bells next?!!!

They won’t be hard to find!

Firefighters from Station 1 will be parking a 49-foot long, 79,000-pound Fire Truck in the middle of Pioneer Square tomorrow from 11:00 am to 1:00 pm in order to raise awareness and money for the Red Kettle Campaign. The truck’s aerial ladder will be extended over 60 feet into the sky and a local news channel will have the opportunity to broadcast live from the bucket high above Pioneer Square.

PF&R Public Information Officer Paul Corah encourages citizens to visit the firefighters at Pioneer Square and donate to this year’s Red Kettle Campaign. “We are grateful for the citizen’s support not only of Portland Fire but the Salvation Army’s efforts as well,” Corah notes. “So come on out and see us in the Square tomorrow. With your support and donations, we will be able to help a neighbor in need.”