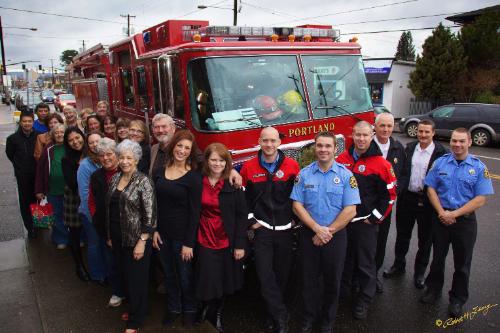 The Trauma Intervention Program of Portland/Vancouver, Inc. (TIP) held their 5th annual Dispatcher/Debriefer Holiday Breakfast last weekend at the Bread and Ink Café in SE Portland. TIP volunteers made the most of their time socializing and reflecting on their volunteer efforts and accomplishments. 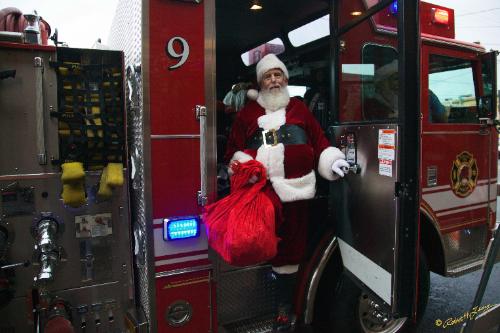 Portland Fire & Rescue Lieutenant Shane and Firefighters Joseph, Chris, and Matthew from Fire Station 9 took part in the festivities by delivering the best sort of holiday cheer to the breakfast - Santa Claus! 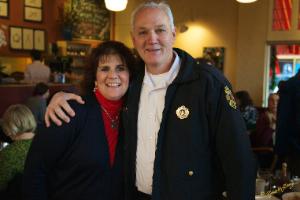 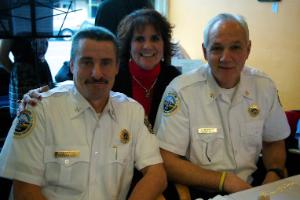 The breakfast honored specially trained TIP citizen volunteers who coordinate and provide assistance and support not only to victims and their family and friends immediately after a traumatic incident or sudden loss, but also to other TIP volunteers after an incident occurs. TIP volunteers are requested by and work with local police, fire, and emergency medical crews. 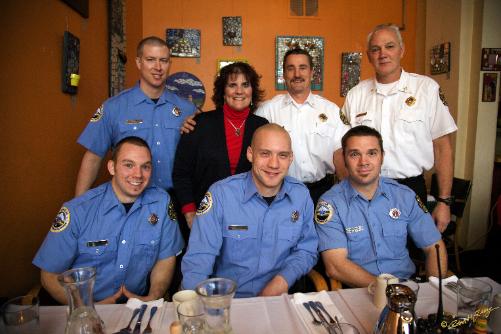 Each day, emergency responders in our area like Portland Fire & Rescue call for a TIP volunteer to show up on-scene and support those who are emotionally wounded.  TIP has been in the Portland area for over 17 years and works closely with local communities to establish emergency services volunteer programs that are staffed with well-trained citizen volunteers.  TIP volunteers provide support services on a 24-hour, 365-day basis.  TIP of Portland/Vancouver responded to 2,007 calls in 2009 and served 12,214 citizens in our area.

Interested in learning more about TIP? Visit their website at http://www.tipnw.org and consider signing up for the January 2011 TIP Training Academy!

I’have been looking everywhere for this! Thank goodness I found it on Bing. You have made my day! Thanx again
http://straight2voicemail.com.au

Hi there it’s me, I am also visiting this web site daily, this web site is genuinely pleasant and the visitors are actually sharing pleasant thoughts.Here is my web page
http://americanmdcenter.com

Just wanted to say I love reading your blog and look forward to all
your posts! Keep up the outstanding work!
http://pmcc-india.com

This article offers clear idea for the new users of blogging,
that truly how to do running a blog.
http://thanishq.com

This is my first time i visit here. I found such a substantial number of intriguing stuff in your blog especially its exchange. Really its exceptional article. Keep it up.
http://www.skumagic.com

I go to see everyday a few websites and blogs to read content, except this blog gives feature
based content.
https://www.kubermoverspacker.in

A very well explained and described, I like your journal. It is really simple and straight forward but very informational. Thanks for giving valuable information, I is very helpful for my Best
http://americanmdcenter.com/services/porcelain-veneers

I see your point, and I totally appreciate your post. For what its worth I will tell all my friends about it, quite resourceful. Later.
http://straight2voicemail.com.au

Much valuable information that I got after reading the article you wrote This is indeed a great new posts I have met Thank you very much willing to share information useful to us.
http://americanmdcenter.com/services/porcelain-veneers

Hi there! I’m at work surfing around your blog from my new iphone!
Just wanted to say I love reading through your blog
and look forward to all your posts! Carry on the great work!
http://www.browline.com/it-management-London.html

Wow….Your article is very interesting…..Your level of thinking is good and the clarity of writing is excellent…….I enjoyed so much to read this blog…..You expressed the things in simple way that very nice…..thnx for sharing with us
http://godamwale.com

I wanted to thank you for this great write-up, I definitely loved every little bit of it. I ave bookmarked your web site to look at the latest stuff you post.
http://electriciansnorthyork.com

I am often to blogging we truly appreciate your posts. Your content has actually peaks my interest. I am about to bookmark your web website and sustain checking achievable details.
http://electriciansnorthyork.com

Astrology needs no introduction, We all are equally excited to know the next big change of each planetary movement and how it is going to affect me? Is the first question hovering in our minds.
https://you24healings.com/