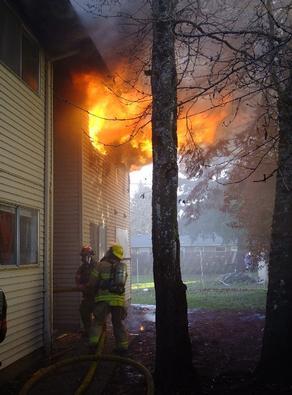 Portland Fire & Rescue responded to an apartment fire today, December 31st, located at 1640 SE 162nd Ave.  The call came in at 3:00pm today and crews arrived shortly after at 3:04 with initial reports of heavy smoke and fire from the top floor of the apartment building.

The fire was aggressively attacked while search-crews checked units for any possible fire victims.  All tenants had safely evacuated from the structure and crews checked the nursing home next door to evacuate some of the tenants while others were sheltered in place.

The main body of the fire was knocked down at 3:26 and the fire was contained before it could extend to the attic of the structure.  There were no injuries reported, yet four adults from the fire unit and two adults with one 20 month old from the apartment below the fire unit have been displaced.  Red Cross will be assisting with the temporary relocation.

Investigators are on scene and updates will be posted as they are received. 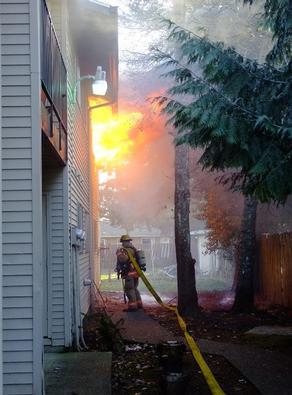