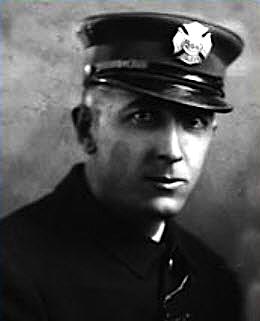 Frank Kearney was a firefighter on Engine 21 (221 SW 2nd) when his apparatus collided with Squad 1 (SW 4th and Taylor) while responding to an explosion at the Holly Dairy at NW 14th and Flanders.  The incident was called in on January 7, 1934.  Engine 21 and Squad 1 were both responding to the alarm from their respective fire stations.  They were reportedly traveling approximately 40 miles per hour when they met at the blind intersection of SW 4th and Pine.  Kearney was killed at the scene and nine other firefighters were seriously injured.  The collision, which was reported as the “most spectacular emergency vehicle crash in Portland’s history,” prevented firefighters from responding to the Holly Dairy incident, which injured 5 people and caused $6,000 in damage.  Kearney was 37 years old at the time of his death.