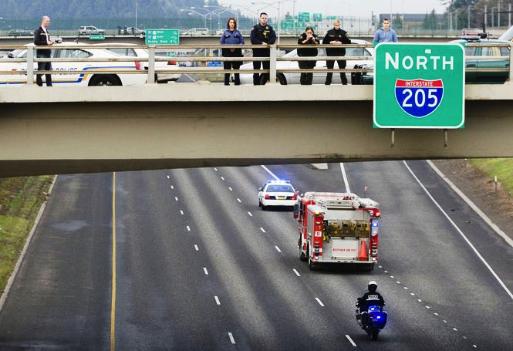 The body of fallen Police Chief Ralph Painter was returned home from the state medical examiner's office to Rainer, Oregon yesterday. A procession of patrol cars, fire apparatus, and other vehicles stretching from Clackamas to Rainer escorted the SUV carrying Painter’s body.

Portland Fire & Rescue’s (PF&R) Deputy Chief John Harding and Engine 11 joined the procession as it passed Foster Road on I-205. Firefighters from Engines 28 and 13 were placed on overpasses over I-84 at stood at attention as the procession passed. Engine and Truck 3 were on an I-405 overpass, and Engine and Truck 22 were placed north of the St. John’s Bridge on Highway 30 to show PF&R’s support and respect.

Painter was shot to death on Wednesday, January 5, 2011 about 11:00 a.m. in a confrontation with a man who had been acting strangely at a car stereo installation shop called Rainier Sound Authority. Daniel Armaugh Butts, 21, was arrested in the shooting and was booked into the Columbia County jail. Painter died of a gunshot wound to the head.