UPDATE: After a thorough investigation, Portland Fire Investigators have determined that the fire was caused by a cigarette that had fallen into the couch. Compounding the potential danger of careless smoking was the smoke detector which was found to have no batteries installed.

Portland Fire & Rescue was dispatched to the report of an apartment fire at 414 SE 151 Ave. Initial reports of heavy black smoke and flames came from a caller who was driving by and stopped to call 9-1-1. Additional information from a second caller was that there may be an elderly woman inside the unit that was on fire. 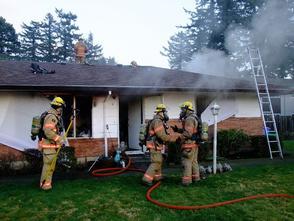 The first arriving crews reported smoke coming from the front room of a single story L-shaped fourplex, and began a quick and aggressive fire attack so that a critical search for the potential victim could take place. A later arriving fire engine laid hose across Stark St from the hydrant to the fire, closing Stark to through traffic during firefighting operations. After extinguishing a couch that was on fire in the front room, interior fire crews did several searches of the dwelling, finding no occupant inside. 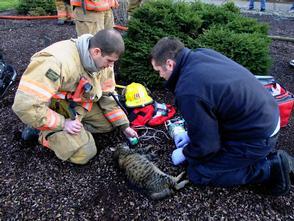 Fire crews did however, find a cat in the back bedroom of the apartment. The cat was overcome by smoke and unconscious, and was brought outside to be tended to by a fire crew that was standing by. All PF&R Chief Officer's vehicles are equipped with donated "Pet Resuscitation Kits" such as the one being demonstrated here: http://www.portlandonline.com/fire/index.cfm?c=53072&a=306609 , and such a kit was used to revive the cat. The cat is currently being transported to a veterinary hospital in stable condition. 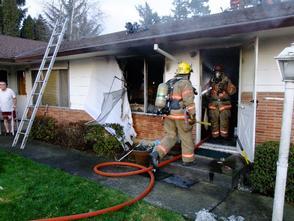 PF&R would like to remind you that stopping to call 9-1-1, remaining nearby in a safe location to answer dispatchers questions and relaying important information to dispatchers such as potential victims inside are actions that can help firefighters in determining the appropriate tactics to use. In the case of a potential victim, an ambulance, which is normally not assigned to a structure fire was dispatched. Fortunately, this time nobody was in the dwelling at the time of the fire. 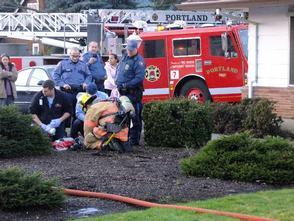 The cause and extent of the fire is still under investigation.