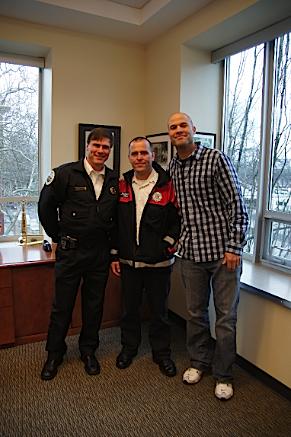 Among those honored during ceremony was Portland Fire & Rescue Lieutenant Damon Simmons. Lieutenant Simmons and civilians Peter Siracusa and Tom Fletcher were honored and awarded with Civilian Medals of Heroism in recognition of their courage and selfless actions while putting themselves in harms way to assist in capturing a violent suspect.

On April 30, 2010, Lieutenant Simmons was walking along NE Broadway while on-duty at nearby Station 13 and witnessed a man being hit from behind and his computer bag taken. The victim was knocked unconscious. Lieutenant Simmons called out to the suspect in an attempt to prevent additional injury when the suspect turned and tried to hit Lieutenant Simmons. Mr. Peter Siracusa was riding by on his bike, Mr. Tom Fletcher in his car, and both stopped to assist. The three men were able to take the suspect to the ground and held him until police arrived.

Fire Lieutenant Matthew Silva and Battalion Chief Don Russ were also awarded a Letter of Commendation from the Portland Police Bureau for their participation and support of operations during Rose Festival 2010.

To read all award narratives presented by the Portland Police Bureau, click here.

I am always searching online for articles that can help me. There is obviously a lot to know about this. I think you made some good points in Features also. Keep working, great job
http://straight2voicemail.com.au