For the second time in two days, Portland Fire & Rescue responded to a house fire caused by improperly discarded cigarettes.

At 4:20 pm on January 20, 2011, PF&R was dispatched to the report of a house on fire at 3604 US Grant Place.  A neighbor called 9-1-1, stating that she saw flames and dark black smoke coming from a room at the back of the house.  Though the neighbor saw no car in the driveway and had pounded on the door in case anyone was inside, first-arriving crews searched the house for occupants while others started fighting the fire.

So much smoke had built up in the house that ventilation – by knocking out windows - was immediately necessary so that firefighters could see.

The fire was extinguished six minutes after firefighters arrived.  Firefighters began searching for "extensions", looking behind walls, ceilings, and floors for places where fire could have spread, unseen.

The investigators found a clear source of the fire: smoking materials that had been discarded too close to combustibles. 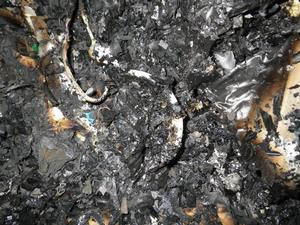 Above: ashtray found at source of fire

Portland Fire & Rescue reminds community members that smoking is the leading cause of preventable home fire deaths.  If you do smoke inside of your home, please make sure you put out all cigarettes, cigars, or pipes before leaving the room. 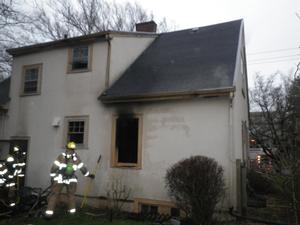 Four engines and a ladder truck were dispatched to the scene, in addition to the investigators.