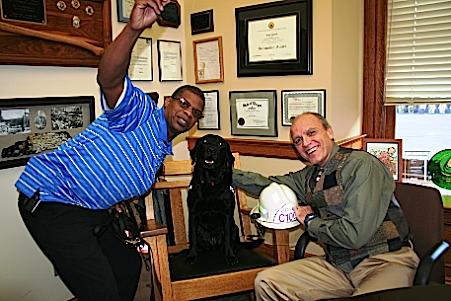 PF&R obtained Lila through a partnership with the Department of Justice’s Bureau of Alcohol, Tobacco, Firearms, and Explosives (ATF). Lila was trained in the ATF's Accelerant Detection Canine Program, and after several months in the program, she met her handler, PF&R Investigator Jackson. Lila and her handler trained together in Front Royal, Virginia, for an additional six weeks – seven days a week – before they began working together at PF&R.

Arson canines such as Lila can be instrumental in the investigation of fire scenes. Trained to detect and alert to microliters of petroleum-based fuels, Lila’s nose can make the difference between determining the cause of a fire or not. Accelerant canines have had better results detecting accelerants than electronic detection devices. Although hydrocarbon detectors can be quite sensitive, accelerant canines can pinpoint traces of accelerants at levels lower than the detectors can register. Additionally, detectors do not discriminate between burned petroleum-based items normally found at a fire scene, like foam cushions, and items that might contain an ignitable liquid. Accelerant canines can, and do, detect those differences.