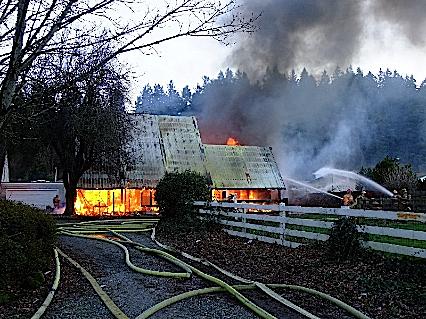 Crews from Gresham Fire arrived at the scene within five minutes of being dispatched and found that the barn on the site of the historic Meadowland Dairy was fully engulfed in flames. The lot also contains two houses and a shed and is surrounded by the Meadowcrest Farm Estates Mobile Home Park. 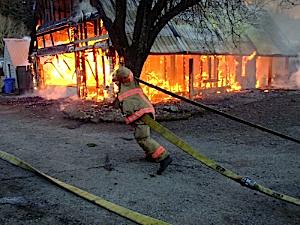 Firefighters battled strong east winds and commanders called for a 2nd alarm bringing additional firefighters from Portland and Gresham to the scene at 5:00 pm. 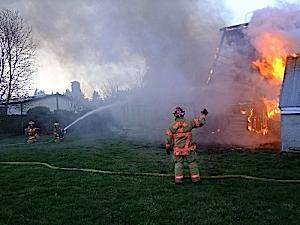 Firefighters worked diligently to save surrounding houses and mobile homes that were threatened by the flames and heat. At 5:10 pm the barn began collapsing and fire crews were pulled back for safety reasons. 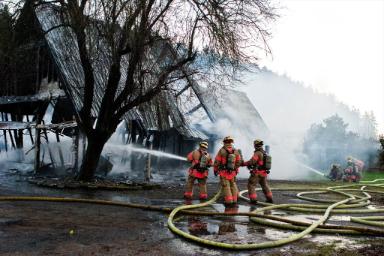 "We are saddened tonight that this piece of Gresham and Portland's history has been lost," said Public Information Officer Paul Corah. "Given the number and proximity of homes to the fire and the gusting east winds, it could have been much worse. Most importantly, firefighters were able to save the surrounding homes and nobody was hurt."

The fire was brought under control at 5:14 pm. Firefighters will remain on scene for the next several hours. Due to the cold and wind, commanders will be rotating crews as necessary to ensure that firefighters stay warm and safe. An investigator is currently on scene and is investigating the cause of the fire.

In 1908, Henry and Anna Anderegg - emigrants from Switzerland - along with Henry's brother-in-law, Henry Naegeli, began leasing land from the City of Portland on what was then called Camp Butte. The Camp family had operated an orchard and cattle ranch on the butte since 1880.

According to Lillian Adams, youngest of Henry and Anna's four children, a City Commissioner named John Mann wanted to ensure that the butte was "taken care of," and felt that a hard-working ranching family would do just that.

For many years the Anderegg family pastured 600 to 800 dairy cows and a number of Percheron horses on the property. Several barns and a shed surrounded the family home. The Anderegg family created and ran Mountain View Dairy; the name was later changed to Meadowland Dairy. The family was also very involved in the community and often offered tours for area schools. The original homestead on the butte was a gathering place for the local Swiss community to get together to dance, sing and yodel. The Andereggs loved living on the butte, not only for the beautiful open spaces that reminded them of home, but also for the spectacular view of the many snow-covered mountains.

In 1924, the farming operation was moved to the base of the butte to property on SE Powell Blvd. between SE 157th and SE 174th avenues. The City allowed the Andereggs to continue to pasture cattle and horses on the butte to preserve the open meadows. The butte's name was changed to Powell Butte in the late 1960s, but many locals just called it Anderegg Hill.

Lillian Adams was born on Powell Butte in 1924, although her family moved off the butte into an 1892 Victorian farmhouse on Powell Blvd. when she was six months old. Everybody worked hard in those days. Lillian's older brothers, Walter and Tracy, and her sister Lena would each milk 20 cows before heading off to school in the mornings. The milking parlor was built in 1961 and with Lillian's help, her brother Walter made sure that every child that came to the dairy got to try to milk a cow. Each child also received ice cream and chocolate milk to remember their visit. Anna, Lillian and Lena would feed 28 dairy workers around the kitchen table three times a day.

In 1948, Lillian married Wayne Adams, who had worked at the dairy as a young boy. He continued to farm the property until 1989.

Today, the dairy is no longer in existence. In the early 1970s the homestead was divided between the four children. Lillian wanted the family home and some surrounding acreage that she eventually developed. After the death of her husband in 1989, Lillian developed Meadowcrest Farm Estates. The family home is filled with heirlooms and photos of cows and the dairy operation. It also serves as Lillian's office, as well as a meeting place for family and park tenants.

IT WORK 100%....I just got my Marriage fixed, I contacted a real spell caster that helped me change my husband’s heart to love and want me again, and he really did and now we are very happy together. My husband left me for another woman, This was just 3 years of our marriage. The most painful thing is that I was pregnant with our second baby. I wanted him back. I did everything within my reach to bring him back but all was in vain, I wanted him back so badly because of the love I had for him, I begged him with everything, I made promises but he refused. I explained my problem to my friend and she suggested that I should rather contact a spell caster that could help me cast a spell to bring him back , I had no choice than to try it. I messaged the spell caster called dr unity, and he assured me there was no problem and that everything will be okay before 11 hours. He cast the spell and surprisingly 11 hours later my husband called me. I was so surprised, I answered the call and all he said was that he was so sorry for everything that had happened He wanted me to return to him. He also said he loved me so much. I was so happy and went to him that was how we started living together happily again.thanks to dr unity . if you are here and your Lover is turning you down, or your husband moved to another woman, do not cry anymore, contact Dr.Unity for help now..
Here his contact...WhatsApp him: +2348055361568 ,
Email him at: Unityspelltemple@gmail.com

sincerely i was so sad when my husband was taken away from me  early this year march to be precise, and i was so confused because i love him so much and i wouldn't want to loose him so soon so i decided to look for a possible solution to get rid of the woman behind him  despite knowing it has no remedy as advised by my friends, everyday my  heath depreciate and keeps loosing weight and strength, a friend advised me to try Dr Aluya spell caster, that he have helped her sister and i was reluctant about it until after a second thought i decided to give it a try because no harm in trying and immediately i contacted him he assure me that my husband will be back within few days of the spells,I only sent him my husband pictures and my husband was back to me,the dr also asked me if I want the woman that took him away from me dead,I felt pity for her and said no,this dr is really powerful,I couldn't believe it until my husband came back to me with gifts,if you want his help also,