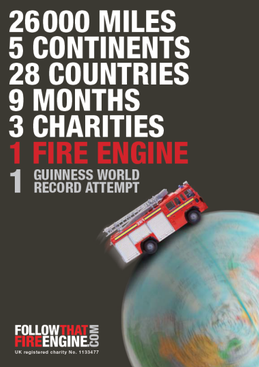 In July 2010, a group of 22 friends set out on a mission to set the Guinness World Record for the longest emergency call out! FOLLOW THAT FIRE ENGINE (FTFE), an expedition led by Steve Moore, left London on July 18th to travel across five continents, visit 28 countries and cover 26,000 miles over a nine month period.

FTFE is dedicated to the memory of Steve's father, Garth Moore, a firefighter who died at this time last year at the age of 63, after a brave battle with lung cancer. Garth was a firefighter at Wimborne Fire Station in Dorset and had dedicated his life to fighting fires and saving the lives of others, over the course of his 33 years in service.

The goal is to raise money and awareness for three charities: Macmillan Cancer Support, The Fire Fighters Charity, and Roy Castle Lung Cancer Foundation. 100% of money raised will go to three charities supported. Shipping, fuel and living expenses will all be funded by the crew members.

The crew is taking turns driving a Mercedes 917 4x4 Water Tender Ladder fire engine. The truck provides plenty of storage space, essential for the camping equipment and supplies required to be on the road for the long months. One of the most difficult challenges the Follow That Fire Engine crew has faced is traversing the world’s oceans – 11,000 miles of open water. The logistics of booking the shipping and ensuring the fire engine arrives at ports on time is of utmost importance.

In July 2010, the crew left London on its initial travel stage and headed east to Moscow, Russia.  From Russia, the crew traveled 4,900 miles to Beijing, China following the Trans-Siberian railway.  After leaving Beijing, the crew made its way to Hanoi, Vietnam, then onto Singapore, and to Australia, stopping in Darwin and Melbourne. The next stage of their journey took them to New Zealand, and then onto Vancouver, British Columbia.

“The expedition has not been without incident,” explained Steve Moore in a previous interview. “We suffered a damaged fuel tank in Switzerland, had to provide emergency medical assistance at a serious road traffic accident at the Russian/Lavian border, and the crew are suffering from crippling back pain and sleep deprivation as a result of extremely poor road conditions. Despite this though, the crew remains immensely positive about the challenge, and we’re determined to complete the feat.” 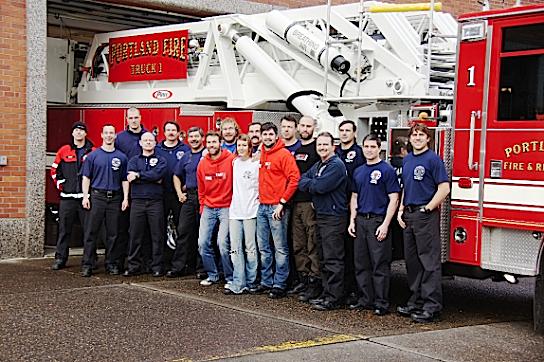 Last night, the five-person crew consisting of Steve, Ben, Amy, Rob, and James arrived at Portland Fire & Rescue’s Station 1 in downtown Portland for an Hawaiian dinner, a place to sleep and recoup, and a hearty breakfast all cooked by Portland firefighters. 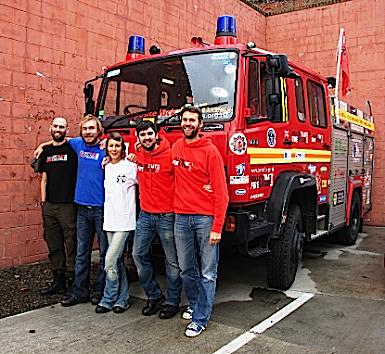 The group left around noon, heading South toward Eugene and then onto Hermosillo, Mexico. The last two stages of their travels will be to New York City, then Casablanca, Morocco, and finally back to London.

Additional photos of the FTFE Crew's visit can be viewed on PF&R's Facebook page here.

Overall Fantastic Article, Can I share this article please? 🙂