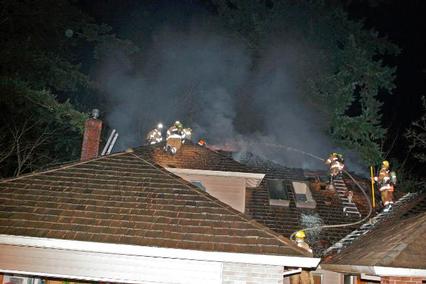 At 5:34 pm, Portland Firefighters responded to reports of a house on fire at 4819 SW Stonebrook Ct. Upon arrival, firefighters found heavy smoke and flames coming from the back of the home.

Incident commanders called for additional resources to fight this fire bringing more firefighters, engines, and trucks to the scene.  A rehab unit was also called to the scene with additional air bottles and supplies for firefighters battling this blaze.

A father and his two children were home at in their basement at the time of the fire.  They reported hearing popping noises and then power to the home was lost.  The father also reported seeing a bright flash, at which time he quickly got his children out of the house and called 9-1-1 as smoke began filling the basement. 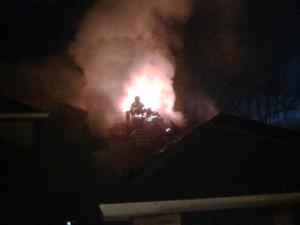 The fire spread from the basement up the walls and into hidden spaces in the attic, making this fire difficult to extinguish.  Firefighters had to cut an extensive number of holes in the roof to vent the fire, smoke, and heat.  Three pets were also in the home at the time of the fire.  Firefighters determined that one cat survived, one cat is deceased, and a dog is still unaccounted for.

"At the time of this fire, commuters were returning from work and many drove over our fire hoses," said Public Information Officer Paul Corah.  "PF&R asks citizens never to drive over a fire hose at an emergency scene.  This could jeopardize the integrity of our firefighting equipment and compromise the water supply firefighters need to fight a fire." 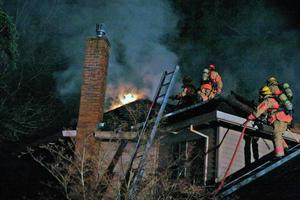 Two Fire Investigators are currently on scene investigating the cause of the fire.  The home's value is estimated at approximately $600,000; preliminary estimates are approximately $220,000 damage to the home.  Fire crews will remain on scene throughout the evening to monitor for hot spots.