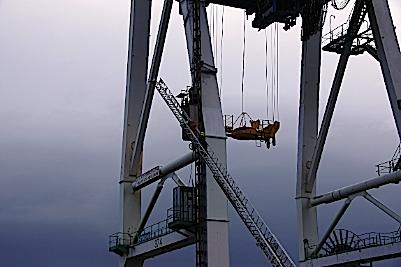 At 8:35 am, Portland firefighters responded to reports of two individuals trapped inside a crane elevator 80' in the air at Terminal Six located at 7201 N. Marine Drive. Firefighters from North Portland's Station 22 arrived shortly after being dispatched to the scene. Upon arrival, firefighters confirmed that two workers had become trapped in the gantry crane's elevator. This crane is designed to transport cargo containers from ship to shore. Firefighters extended the aerial ladder on Truck 22 up to reach the stranded workers. 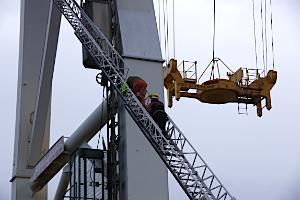 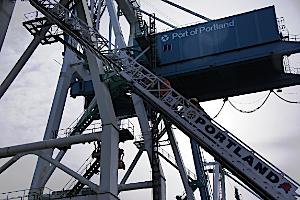 "Firefighters climbed the ladder and assisted each individual down to safety," said Portland Fire & Rescue Battalion Chief Tom Williams. "The crane was 150 feet tall and our fire truck ladders only extend 100 feet. Fortunately, we were able to reach the workers at the 80 foot mark, making this rescue less complicated than it could have been." 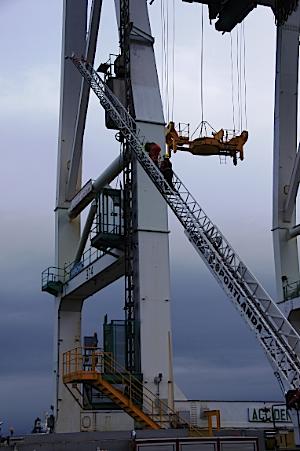 Due to current weather conditions, winds on the Columbia River have been gusting around 40 mph. Firefighters determined that these sustained high winds loosened an electrical wire, which shorted out the elevator and caused it to malfunction. The workers were stranded for approximately 30 minutes while the rescue took place and remarked to rescuers that they felt the crane being blown around prior to the incident. Both workers were unharmed. 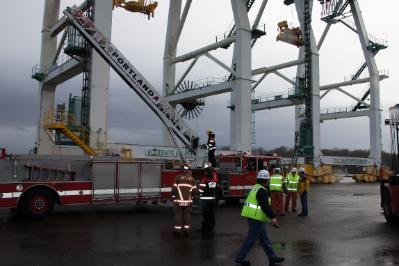 Portland Fire & Rescue is equipped with nine ladder trucks, which are strategically located throughout the City of Portland, and a High Angle Rope Rescue Team to assist with these types of rescues.