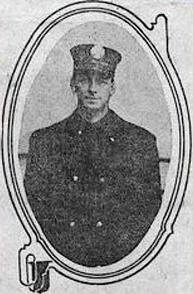 Emil Gustafson was a Lineman for the Fire Alarm Telegraph Operation of the Portland Fire Department. On March 16, 1916, he was atop a telegraph pole at NW 26th and Nicolai Streets doing maintenance on the lines when he came in contact with a 10,000 volt electrical line. His body immediately went limp and he was left suspended from the pole by his safety belt. Other Linemen lowered him to the ground and began resuscitation efforts. The continued their lifesaving efforts on the scene for over 4 hours before transporting him to Good Samaritan Hospital, where he was pronounced dead. Gustafson was survived by his wife, two sons, and one daughter.