According to Portland Fire Investigators, access to this facility will not be allowed until their investigation is complete.  Public Storage employees are on-site and will begin contacting affected customers Sunday morning.  There are 444 storage units in this complex.  The fire investigation is ongoing and is expected to take two to three days to complete. 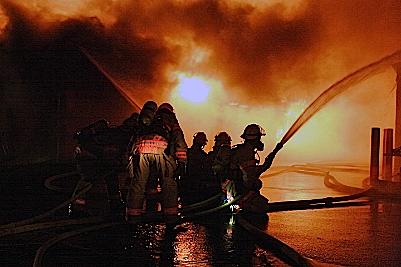 Portland Fire & Rescue responded to reports of the smell of smoke in the vicinity of a commercial structure at 1202 SE 82nd Avenue at 8:21pm. Firefighters from SE Portland's Station 19 were first on scene in less than four minutes.

As firefighters searched for the source of the smoke, flames became visible from the roof of the structure - a cinder block storage unit facility that spanned an entire block. Small explosions were also heard inside the building. At 8:37 pm, flames which engulfed the roof necessitated the incident commander to order fire crews off the roof for their safety and to take a defensive attack. The commander then called for a 2nd alarm bringing more firefighters, engines, and trucks to the scene. 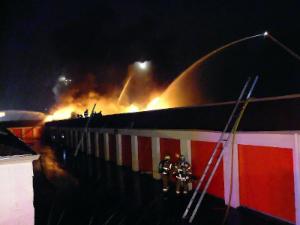 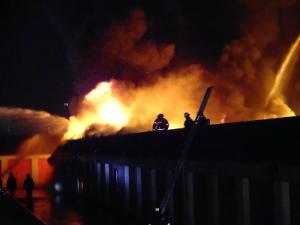 While firefighters sprayed water from aerial turrets on multiple fire trucks, firefighters on the ground began going from storage unit to storage unit, cutting opening doors and spraying water on the fire. At 9:46 pm, the roof began collapsing in portions of the structure as firefighters continued attacking the blaze from the air. 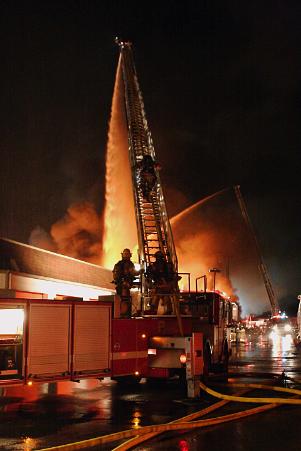 "A passerby called this fire in saying the air smelled like a campfire. Minutes later it grew into a second alarm," said Public Information Officer Tommy Schroeder. "This shows the importance of calling 9-1-1 immediately if you believe there is a fire because seconds count."

A rehab unit was called to the scene with additional air bottles and supplies for firefighters battling this large blaze, as well as two fire investigators who are investigating the fire's cause. SE 82nd Avenue remains shut down in both directions in the vicinity. The fire was brought under control at 10:16 pm. 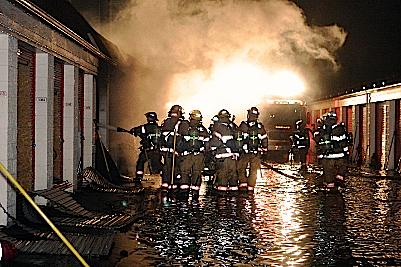 Now that the fire has been stopped, firefighters will assume a secondary mission - property conservation. With five fire trucks spraying 1,500 gallons of water per minute on this fire, there is now eight inches of standing water in the storage complex. In addition to monitoring for hot spots, firefighters are clearing drains and mechanically pumping out water in an effort to salvage property.

Just two hours prior to this fire, firefighters from Station 19 - the first fire engine on scene - concluded a 100th anniversary community open house that welcomed hundreds of citizens into the station to mark 100 years of protecting life and property in SE Portland.

We had a storage unit here. Will you eventually release the cause of the fire? Thanks for protecting our property, I think we will only have water damage. Christine

Wondered what ever happened here?? Can't find anything online about updates or follow ups (except frustrated customers of PS trying to get their claims filed and resolved).

Thinking of renting here and sounds like they've updated their units and location, but no one seems to know the "WHY" of this fire's cause!