“One of work sites drew 80 volunteers,” Clark enumerated, “and the site with the smallest group still had about 25. In all, more than 350 people volunteered at our ten sites this year.”

In addition to the good work of this small army of weed-plucking, ivy-pulling, and bush-planting volunteers, Clark reported that the event attracts new people to the cause.

“At my site, at Lovena Farm near Johnson Creek Boulevard and Bell Station, we had a great bunch of kids from a church group helping out for their first time,” said Clark. “Interestingly, the group was fasting to help raise awareness for famine victims in Africa. They were helping locally by planting trees to shade the creek, while acting globally at the same time.” 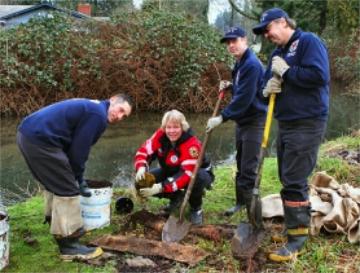 On the bank of Crystal Springs Creek, Portland Fire & Rescue Station 20 crew of

“For the first time, Portland Fire & Rescue (PF&R) was invited to participate,” said Westmoreland Station 20’s Lt. Deborah Weissenbuehler. “I talked to my crew about it, and they were happy to come out and help.”

Helping to improve the health of Crystal Springs Creek — it’s a tributary of Johnson Creek — is important to the firefighters, explained Weissenbuehler, “because our fire station is right on the creek; it makes it a beautiful place to work. And, since our community treats us so well, this is the perfect opportunity to give a little something back.”

JCWC Board member Jennifer Antak said her group of more than 40 volunteers were engaged in invasive plant removal, tree and shrub planting, and mulching, just south of Westmoreland Park. “It’s our fourth year there; when we started, the entire area was choked off and covered with blackberry brambles.”

It’s important work, Antak added, “Because Johnson Creek is been denuded over many decades. The native trees are really necessary to reduce the stream temperature which is very important to help salmon return.”

A couple miles north, a phalanx of 60 volunteers was busy removing invasive greenery and planting native trees at the east end of Errol Heights Park, along S.E. 52nd Avenue, under the “Friends of Trees” banner.

“We’ve been a part of the Johnson Creek Watershed Wide Event for several years,” reported their site’s leader, Logan Lauvray, Green Space Manager with the Friends of Trees. “And, we’ve been planting here with Portland Parks and Recreation for at least 10 years.”

Even though the creek is some distance from this particular park, Lauvray pointed out that, “this is the top of the watershed. Trees and native plants cool and hold rainwater that makes its way down to Johnson Creek. The cool, clean water helps the fish, and other wildlife downstream from here.”

When we met up again with Matt Clark at one of their two celebratory lunches, Matt Clark said the Watershed-wide event “gives people an opportunity to ‘connect’ with where they live. Their work helps them forge a connection with their land, and with other volunteers who are also working to benefit the Creek.”