The seventh annual America's Most Wanted (AMW) All-Star Contest is inviting YOU to vote now for your favorite first-responder.

AMW established the All-Star Contest seven years ago to help give special recognition to the police, firefighters, Emergency Medical Technicians (EMT), and other first-responders who dedicate themselves to protecting the public. As in previous years, thousands of police officers, firefighters, EMTs and other first responders are expected to be nominated. Each one is a hero, but only one will become the 2011 AMW All-Star.

Voters like you will select weekly finalists, and each finalist will be profiled on AMW. Through online votes, the public will choose the grand-prize winner. In May 2011, John Walsh will present the 2011 AMW All-Star winner with a check for $10,000 along with additional prizes. 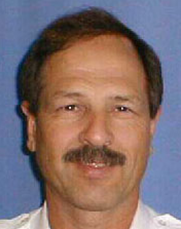 For the 2011 Contest, Portland Fire & Rescue’s own Hazardous Materials Technician Grant Coffey was nominated! What makes Coffey an All-Star? Read his nomination below:

“For over 35 years, Grant Coffey has been a dedicated firefighter and hazmat personnel with Portland Fire & Rescue (PF&R), 24 years as a command-level officer. Currently he is the Hazmat Team Coordinator with PF&R and for the last 7 years has responded to all hazmat calls within Multnomah County, Oregon. Grant is a state certified Radiological Safety Officer as well as a certified Radiation Specialist. He is also a member of the post 911 Mayor's Blue Ribbon Terrorism Task Force and the founder of the Neighborhood Emergency Team program for the Portland Fire Bureau. A former Safety Officer, Grant is the founder of Metro Safety Officer's regional group for the Portland Metro area and is a certified Incident Safety Officer instructor for FEMA. As a fire science instructor, Grant has spent over 31 years teaching new firefighters at the Portland Community College. He has a Fire Science Associates Degree and is currently finishing his Bachelor's Degree in Fire Administration. With over eight years as an adjunct instructor for the Department of Homeland Security he is teaching the system for structural collapses all over the USA. Deputy Chief Harding states that Grant is passionate and dedicated to the city of Portland as well as extremely knowledgeable about fighting fires and hazmat rescues.”

Good luck to everyone!