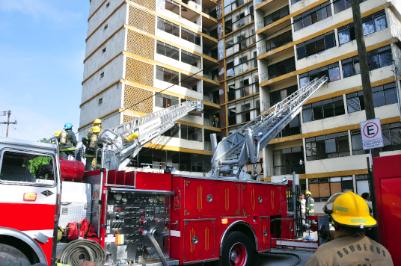 The Portland Bombero Program traveled down to Guadalajara, Mexico April 2nd - 9th, providing training and equipment to our sister city.  The Bombero Program, started in 1999 and co-sponsored by the Sister City Association, has allowed Portland firefighters or “bomberos” to train and donate equipment to their Mexican counterparts. 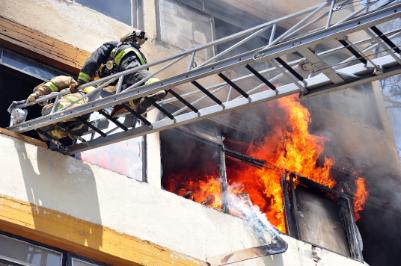 This year, the Fire Department of New York (FDNY) Battalion Chief Daniel Sheridan accompanied Portland Fire & Rescue’s (PF&R) Joseph Troncoso to Guadalajara in order to provide his expertise in high-rise firefighting for the Guadalajara firefighters.  Chief Sheridan has been with FDNY for over 25 years, serving in the Bronx and Manhattan.  He is an instructor every year at FDIC in Indianapolis and also pens a monthly column in Fire Engineering Magazine.  Prior to leaving for Guadalajara, Chief Sheridan taught a class for Portland firefighters. 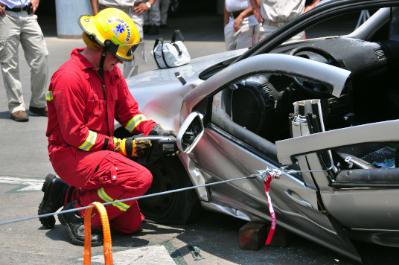 With Guadalajara facing urban growth constraints similar to what we have in Portland, all of that city’s growth is now going vertical.  A 50-story building is under construction and they had requested high-rise tactics as a suggested topic for this years training.  Chief Sheridan met Troncoso last year when both were providing training in Chile, South America at an International Fire Conference.  Chief Sheridan has run a Bombero Program similar to Portland’s for the past nine years in Ecuador.  In Guadalajara, they were given a rare opportunity….the chance to do “live fire” training in a high-rise structure.  The former state pension building is a 10-story non-combustible high-rise slated for demolition and it has been vacant for six years.  Chief Sheridan and Troncoso were given permission by the local government to provide realistic fire conditions for the purpose of training the local fire crews.  Over 170 Guadalajara firefighters participated in the three-day class and hands-on sessions.  Nearly everybody said that it was the best training they’ve ever had. 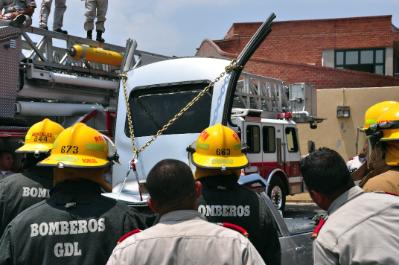 Another highlight of the trip was the new extrication equipment and training provided by Warn Industries.  Warn is the world leader in winches and has produced a battery-powered winch that coupled with a Sawzall, allows firefighters to complete most extrication activities.  Warn donated two of the winches to the Guadalajara Fire Department and flew their engineer David Scuito (who is a volunteer Molalla Firefighter) down to Guadalajara to provide the class.  Scuito demonstrated pulling the steering wheel, pulling the doors and removing the top of the vehicle…all using the 24 volt winch.  This is of tremendous significance, as on of the most common requests we’ve received throughout Latin America is to provide vehicle extrication training.  When we’ve asked what equipment they have the response is always the same…”none”.  The Hurst and Holmatro hydraulic spreaders and cutters do a great job of extrication, but they are cost-prohibitive to departments in Latin America.  To put things in perspective, compare firefighter salaries and what the dollar buys.  A firefighter makes approximately $6,000 U.S. in Guadalajara annually.  To buy a new hydraulic spreader/cutter set costs at least double what they pay a firefighter in a year. This prices such equipment beyond the means of these struggling departments.  Relatively speaking it’s comparable to us paying $150k here for the equipment.  The Warn 24 Volt Pulzall winch costs only $500 U.S. and comes with two batteries, charger and all the necessary straps and cables to do the extrication.  Now every department can afford the equipment necessary to do this life-saving work. PF&R also provided a WMD awareness class that Hazmat Coordinator Grant Coffey prepared for them and an Intermediate ICS class. 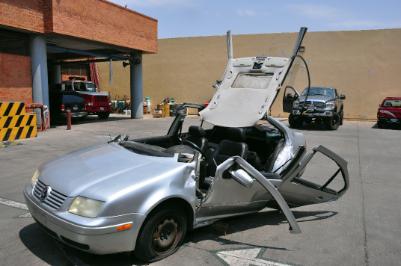 The Portland Bombero Program is in its 12th year of providing training and equipment to our sister city of Guadalajara and other Spanish-speaking cities throughout Latin America. Learn how the Bombero Program has created a unique and beneficial relationship between Portland and Guadalajara here.

Photos taken and blog story written by Joseph Troncoso, the Director of the Bombero Program and Fire Inspector at PF&R. Additional photos of the training will be posted on PF&R's Facebook page.

I see you are still going good things for the community.. Congrats