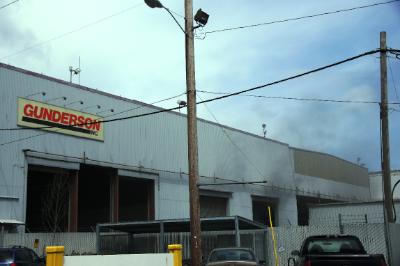 At 12:10 pm, Portland firefighters responded to reports of a fire in an industrial building located at 4350 NW Front Ave.  Initial calls to 9-1-1 indicated that black smoke was pouring from the roof of Gunderson, Inc. and that all employees were evacuating the building. 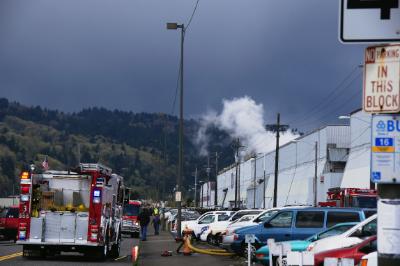 At 12:29 pm, incident commanders called for a 2nd alarm response bringing additional trucks, engines, and firefighters to the scene to assist with knocking down this fire.  Firefighters encountered fire burning through building's asphalt and metal roof from inside the structure.  The fire was contained to two - 200 yard long paint booths inside the building.  The facility manufactures rail cars and marine barges.

Firefighters on the roof used metal cutting saws to cut a 20' x 10' hole in the roof and knock down stubborn fire that was burning along the plywood roofing layer underneath the metal roof.  Approximately 65 firefighters were on scene and the fire was brought under control at 12:53 pm. 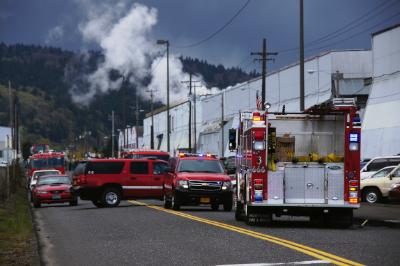 "Fortunately no one was injured and all employees evacuated the building safely," said Portland Fire & Rescue Public Information Officer Paul Corah.  "Of concern for firefighters was the fact that painting materials used in this manufacturing business were producing toxic smoke, so precautions were taken to ensure firefighters' safety."

Investigators are currently on scene investigating the cause of the fire and no damage estimates are available at this time.