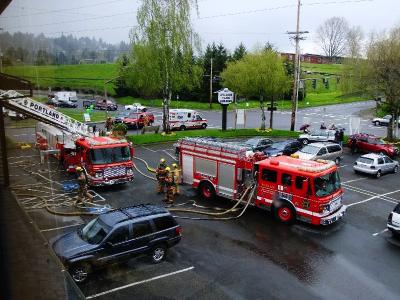 Portland Firefighters responded to reports of smoke in a medical office building located at 1820 SW Vermont Street at 11:54 am. When firefighters arrived at the Wilson Park Building, they found smoke coming from the building's roof. 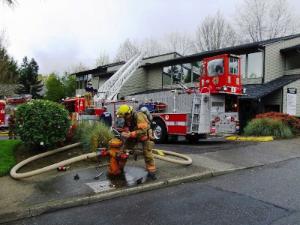 An alert individual had noticed smoke coming out of an empty patient room and immediately called 9-1-1. Firefighters from SW Portland's Station 5 located the fire in the building's attic and began a fire attack, while a ladder truck was extended to the roof to assist with firefighting efforts. All occupants evacuated the medical building safely and there were no injuries. The fire was brought under control at 12:22 pm. 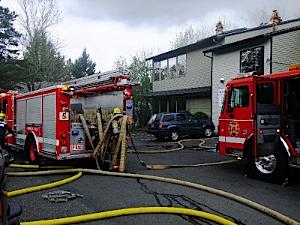 Fire investigators report that this is the second fire to occur in this building in two years. The fire two years ago was caused by faulty electrical wiring on the opposite side of the building. This fire was determined to have been caused by an electrical short in the building's wiring in a portion of the building that was not remodeled after the last fire. Investigators estimate that the damage caused from this fire is $50,000.

According to PF&R Battalion Chief Scott Beyers, "Fortunately this building was occupied during the time of the fire, which led to its early detection and minimized damage." "If the fire had occurred after the building was empty, it would have incurred significantly more damage."