At Portland Fire & Rescue (PF&R), we believe it's never too early to start recruiting future firefighters.  On Thursday, April 28, 2011, PF&R held Bring Your Student to Work Day for employees at our Training Center. This year close to 100 students participated.

This event was sponsored by PF&R, Portland Firefighters Association (PFFA) Local 43, and the Fire Chief's Association.

There were several different activity stations including a hands-on tour of a fire engine, riding in a fire engine, spraying water at a ball, knocking a fire hat off a cone with a fire hose, trying on and walking in turn-outs, and finding a "hose baby" in a maze. 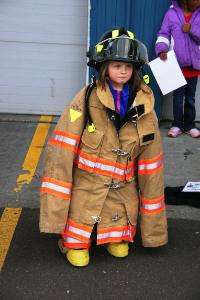 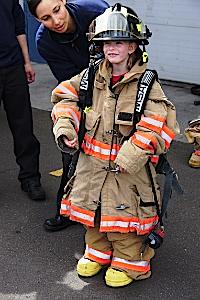 Many of the students excitedly noted how much they enjoyed getting to see how their firefighting parent keeps the citizens of Portland safe.  When asked what they would like to do when they grow up, one student proved exactly how valuable Bring Your Student to Work Day is, as he said without a doubt — “well, after seeing this stuff, I want to be like my Dad.” 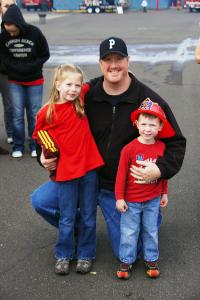 Firefighters from PF&R’s Station 2 put on live demonstrations including a standpipe evolution, a vehicle extrication, and a vehicle fire.  At the conclusion of the activities, PFFA Local 43 cooked and served a BBQ lunch for all.  Each student received an fire prevention goodie bag and fire chief helmet from the Public Education Office.

Additional photos will be added to PF&R's Facebook page here.