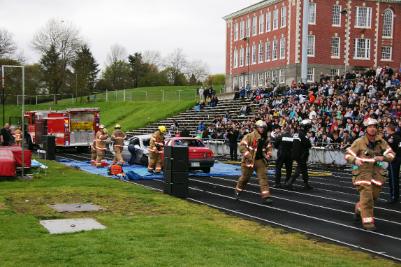 Oregon Impact, a nonprofit drunken-driving awareness and prevention organization, is working with local area high schools like Franklin High to provide community education, prevention, and awareness activities to stop individuals from driving under the influence of intoxicants. 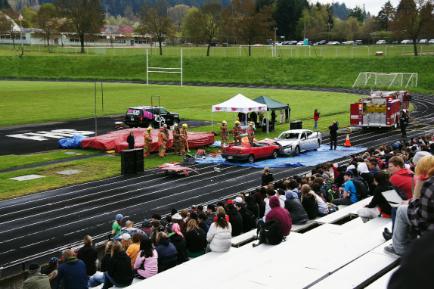 Students from Franklin High pulled a tarp off two severely damaged cars and where several students lying perfectly still, pretending to be dead or critically injured. The dramatization included a great deal of fake blood and wounds. 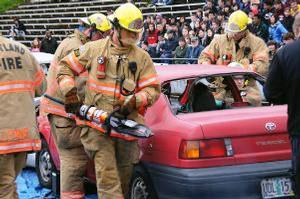 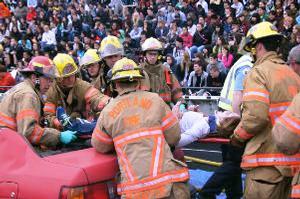 Portland firefighters from Engine and Truck 25 cut off the top of one car to get passengers out. They drove the "injured" away in the ambulances and put those playing dead into body bags and took them away as well. 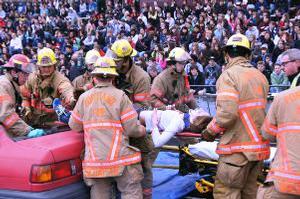 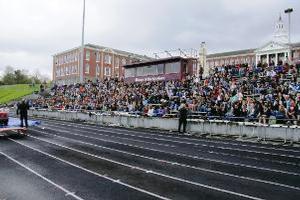 In the final moments of the simulation, the “driver” of the one of the vehicles was given a field sobriety test by Portland Police.  The “driver” failed the test and was arrested and taken away.

Portland Fire & Rescue’s Public Information Officer Paul Corah believes this program is an effective reminder of the dangers of drunk driving, not just for those in the vehicles, but to everyone involved.

“I think it gives students a definite appreciation of what emergency service providers do, what goes on out there and how difficult emotionally it is for those who respond to these situations,” Corah noted.  “Students were able to see first hand the impact that DUI-related crashes have on the community.”

this is what my tax money goes to?

The best way how to fight DUI offense charges from ever happening in the first place, is through this type of awareness through prevention simulations. In many ways this youth training is more helpful than the most strictest DUI laws can be in saving lives.

I would also like to add that DUI laws now requiring the Ignition Interlock to be installed for a first offense, is now almost standard in every state. Some states just recently lowered it’s legal blood alcohol limit to .05 BAC. As further discussed at https://www.fightduicharges.com/ignition-interlock-device/ this will also result in more drivers having to get the Ignition Interlock device penalty in order to legally drive again, with the alcohol legal limit being so low under the DUI law.

Like driving under the influence of alcohol, education and pleas failed, but enforcement has worked. Texting while driving is a larger day-to-day risk to life than terrorism and gun violence combined. The enforcement of the laws, and application of penalties, are both needed.<a href="https://www.codrivered.com/">Drivers Education</a> can raise awareness.

Law enforcement and penalties are sometimes just not enough. The authorities should also accompany it with education increasing the awareness of every driver with the dangers of distracted driving. It’s surprising that adults are already aware but tends to do it anyway.
Get the best Georgia online Drivers ED Classes, <a href="https://www.georgiadrivereducation.com/">driver's education</a> course right here. We will help to get your Georgia learners permit from the GA drivers.