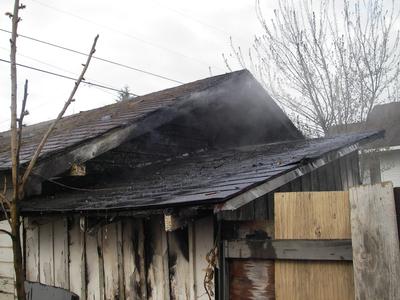 Portland Firefighters responded to reports of a garage on fire at 7035 SE 82nd Avenue at 6:47 am. When firefighters from SE Portland's Station 11 arrived on scene, they encountered a single car detached garage fully engulfed in flames.

Fire was pouring from every window and door of the garage and flames rose six feet into the air on all sides of the structure. 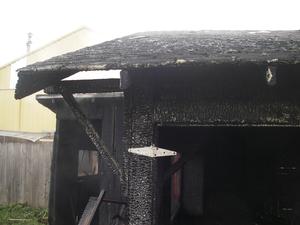 According to Portland Fire Public Information Officer Paul Corah, "The volume of fire coming from all three windows and the garage door was large enough that firefighters decided to pull a much larger hose line than normally used to fight this type of fire."

Firefighters attacked the fire with a 2 1/2" hose line, which puts out 250 gallons of water per minute and requires two to three firefighters to hold this type of line. This attack successfully stopped the fire from spreading to the adjacent home and manufacturing business.

"The fire burned so hot that the wet grass surrounding the garage was burned 10 feet out in all directions of the structure," remarked Corah. 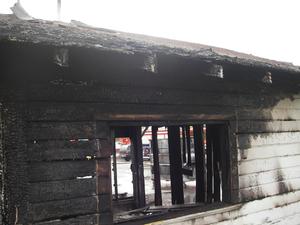 Initial reports indicated that there were chemicals stored in one corner of the garage, and firefighters were advised to take safety precautions near that location. The chemicals were later determined to be typical yard and garden chemicals. The fire was brought under control at 7:00 am.

The garage is a total loss and its estimated value is $30,000. Two Fire Investigators are currently on scene working to determine the cause of this fire.