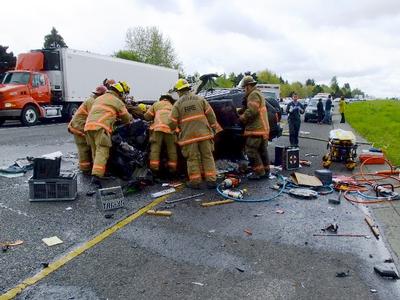 At approximately 9:24 am, off-duty Portland Firefighter/Paramedic Chris Bernard, a 15-year veteran of Portland Fire & Rescue, was driving in the southbound lanes of Interstate 205 near the Foster Road exit when - without braking - a small SUV two cars ahead of him suddenly veered to the left, crossed the center median, and struck a semi-truck in the northbound lanes. A third vehicle was also involved in the collision and rolled over onto its top.

Bernard, also a 24-year veteran of the 304th Rescue Squadron based out of Portland, immediately pulled over to assist the driver who was severely pinned between the driver's seat and the dashboard. Bernard was aided by an off-duty nurse who stopped to render needed first aid to the driver of the SUV.

"Because the driver was so severely pinned in the vehicle, there was little we could do for him until Portland Fire arrived at the scene," said Bernard. "Then I noticed that the SUV had smoke coming from the engine and was concerned that it might catch fire." 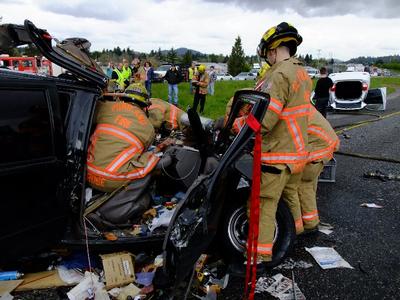 Thinking quickly, Bernard flagged down a local cement truck driver. The cement truck carried a water supply and a hose. Bernard used the water from the cement truck to extinguish any potential fire that might break out in the SUV's engine compartment.

Portland Fire, assisted by Clackamas County Fire, arrived on scene at 9:28 am and used numerous extrication tools to spread the vehicle apart and free the individual including hydraulic rams, hydraulic cutters to cut off the roof, and hydraulic Jaws of Life. 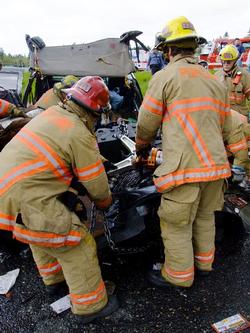 The patient had life-threatening injuries and was transported to a local trauma hospital. Portland Police are investigating to determine the cause of the accident. The driver of the semi-truck was not injured. The driver of the third car that flipped onto its top was able to self-extricate and was not injured. Traffic in both north and southbound lanes of I-205 was backed up for miles due to the accident.

I passed this accident just after it happened, amazing anyone survived. Great job Chris Bernard!

The pinned in man is my Uncle. Thank you very much for helping him Mr. Bernard.

The third flipped over car was my mother. She was taken to the hospital but she is fine, Thank God!
Great job Chris Bernard and local FD.

Lindy, I pray your uncle is going to be ok! Ive been thinking about him all day.

Thank you for your prayers, he needs them. He is in critical condition in ICU. We are all very sorry about the accident and we are also praying for everyone who was involved. So happy to hear that your Mom is OK, Sergey.

Great Job Chris Bernard! I am thankful that my daughter has gotten to work with you this past year in the explorers. She couldn't have a better teacher.

I too drove by this horrible scene! Great job Chris and all of the people involved! I hope your uncle fights his way through this as hard as everyone involved fought to help him. I'm glad the lady that flipped the SUV was ok. Amazing....just amazing!

I certainly want to thank Mr. Bernard. He helped the nurse and I keep from becoming a Roman candle. I was inside the vehicle at the time he was putting out the fire as I was assisting the nurse. As any good First Responder knows the head and neck need to be stabilized in this type of situation. Nurse Tammy and I were taking turns doing just that while talking to the injured man, reassuring him, and monitoring his vital signs. I continued to hold his head and neck when the firefighters first started cutting him out. So I would also like to thank the firefighter who changed places with me in the car as I had no protection on. I would also like to thank Officer Bates of the Portland Police who offered me assistance in cleaning up. Most of all I would like to thank Tammy. She was absolutely first rate and it was a pleasure to work with her.
It was an honor to help this man as he was a Vietnam Vet and had the campaign ribbon on his bumper.I was a USAF medic during the same ERA. I hope the gentlemen does just fine. After talking to him he has been through plenty and certainly didn't deserve to be hurt like this.Please keep posting your uncles improvement and know that he is in my prayers.

Thank you for your post, Tom. My Uncle has a very long road ahead of him. He is responding (a little) and has a back surgery scheduled for tomorrow. The doctor said today that he doesn't know why he isn't paralyzed, thank you for keeping him stable and for helping out a stranger. The more we hear of the help he received, the more touched we are. Uncle Harry is a very strong and tough man, but can still use your prayers. Thank you again for your selfless acts, everyone who helped.

Thank you Lindy. Other than having some neck/back pain and soreness, she is O.K., just giving over the initial shock of everything. I hope your uncle's surgery goes again, best wishes! By the way, does anyone know yet what happened as far as why he went over the meridian to the other side of the freeway? Was it a medical reason?

I meant to say I hope his surgery goes well.

As for any medical reason I can't divulge what we were told inside the car. However when the nurse and I tried to report medical information as well as medical history that we obtained before the gentlemen became less lucid we were blown off. This surprised me as it is standard protocol that every Wilderness First Responder/ EMT and Paramedic are taught to record and relay pertinent information. Lets just say some of the Portland police were real good and some arrogant and beligerent. We never could find which Paramedic was in charge.

What an awful way to start the day! My prayers are with all involved. I am thankful that God gave Tom and Tammy the courage and wisdom to be the first ones to step in and help stablize the gentleman in the car. Sergey and Lindy, you are in my prayers for positive results-surely God has a plan for your mother and uncle. As for Tom and Tammy, thank you for being the arms, legs and wisdom behind this initial response. And to others who took direction from those first responders thank you for your swift and instinctive response. We all know there are people in this world working in roles they are not suited to-maybe those will walk away calmly.

Thank you all for your prayers and support for my Uncle Harry. I will include the link to his caringbridge website so those of you who would like to follow his progress will be able to. It has been really amazing to see the Lord working through so many people to save him. Here is the link: http://www.caringbridge.org/visit/harrystapleton
Thank you all again, and please know that our prayers are with all of you who have been affected by this.

Portland's finest! Outstanding! Thank you and thank you again! Knowing we have men and women like you makes me feel safe!

It's a look like something a big road accident.
http://www.newcarreviewsusa.com/2016-mitsubishi-outlander-review-specs-price-changes-exterior-interior-redesign-engine/