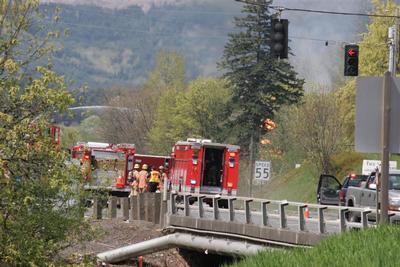 UPDATE @ 4:22 pm: Portland Fire is reporting that the fire is out. Residents will be allowed back into the area in approx 1 hour, Hwy 30 will be closed for several more hours.

The DEQ, EPA and Coast Guard are now onscene assessing the impact on the environment due to runoff from the firefighting efforts.

PF&R Division Chief of Emergency Operations Scott Fisher stated, "Crews from St. Johns Station 22 were the first to arrive, and had it not been for their decisive actions and quick deployment of turrets and aerial streams to cool down the tankers before having to withdraw because of imminent danger, this incident could have ended quite differently."

UPDATE @ 3:12 pm: Portland Fire & Rescue is currently deploying a HazMat Team into the area to recon and formulate a plan to contain the fire and protect all cars forward of the involved tanker.

The train was 20 cars long, 12 of which were tankers carrying denatured alcohol. EACH tanker is carrying 28,000 gallons of alcohol. Currently only (1) tanker is on fire with (1) additional tanker being directly exposed to the fire.

River traffic on the Multnomah Channel within 1 mile of the incident is being restricted and monitored by PF&R Fireboats.

UPDATE @ 2:32 pm: Public Information Officer is moving media staging closer to the incident.
Unmanned "ground turrets" and "aerial streams" are delivering water for the purpose of cooling the adjacent uninvolved tankers to prevent an explosion. Additional resources are being assembled to prevent the spread of the fire and additional harm to property and the environment.

Firefighters are currently responding to a Rail Tanker on fire at about milepost 13 on Hwy 30 north of Cornelius Pass Rd.

2 tankers (out of 13 total) containing Ethanol are on fire. Because of the potential for explosion caused by catastrophic failure of the uninvolved tankers that are being directly impinged by fire, fire crews have withdrawn and are evacuating the area with a 1/2 mile perimeter until it is safe to return to the area.

All travelers should expect long delays. 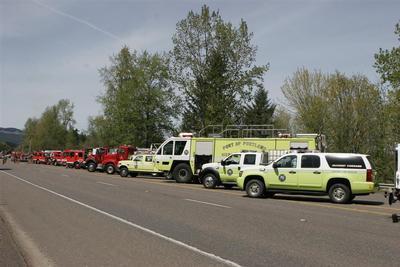